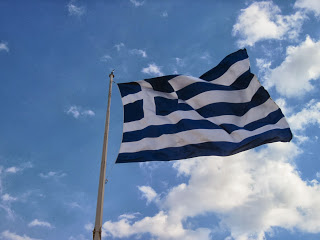 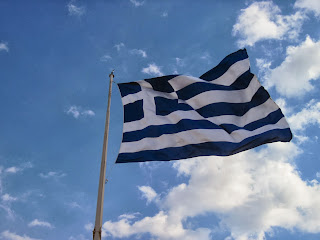 Flying Lufthansa was a very nice experience. The food was good and the wine flowed continually. I was surprised that the wine was from South Africa and not a German wine.

My seat mate is a tour guide who spends half the year in my town. The next person I met is from Smithers, another town near to mine. Small world indeed.
The nine-hour flight was smooth and wonderfully uneventful. We landed at the Frankfurt airport with only two hours until my next flight. I didn’t realize how tired I was – can’t sleep on planes – until we were on the next flight and in a holding pattern on the runway. I had a quick 5 to 10 minute sleep at which time I treated my fellow passengers to a view of all the dental work that I have had done in my lifetime.

The flight might have been smooth but finding the person who was to pick me up from the airport in Athens was another story. I came out of the baggage area to a sea of people with signs. I walked up and down looking for my name and finding nothing. I continued to walk around smiling at everyone because Kostas – my landlord – had a picture of me and I was positive he was amongst all these men!  After an hour of doing this, I was getting some strange looks. I realized I must have looked like someone who was trying to pick up a man!  Eventually I was able to find Kostas who had been waiting outside all this time.

The one bedroom apartment was lovely. We were in a residential area and so I felt like we were part of the real Greece. The cost was 20 euros each – total 60 per night.

The next morning I headed out to find a taverna (restaurant). Flocafe was a great choice. My waitress Evangella was so nice and patient with my questions for her. I sat outside and people watched, my favourite sport. Cappuccino 3.9 Euros; 2 mini brioches 2.6 Euros. 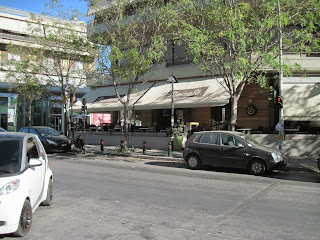 Next stop was to a supermarket. This one had 4 floors. One floor was for meat and dairy; the next was for groceries; the next for housewares. I didn’t make it to the top floor so did not find out what was on it but it could have been anything from clothing to hardware.