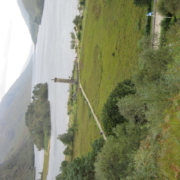 Day five of our tour saw us visiting the Glenfinnan Viaduct. This is from the Harry Potter movie and the Hogwart Express. The Glenfinnan Viaduct, just north of Glenfinnan and about a half an hour west of Fort William.
Our guide timed it so that we had time to hike up the hill – one way to see the viaduct – and see the famous Hogwart Express. There are other ways to see the viaduct and all within easy walking distance of the parking lot. 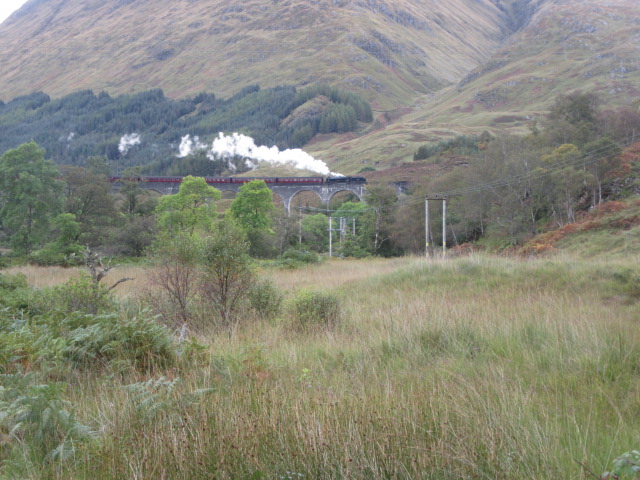 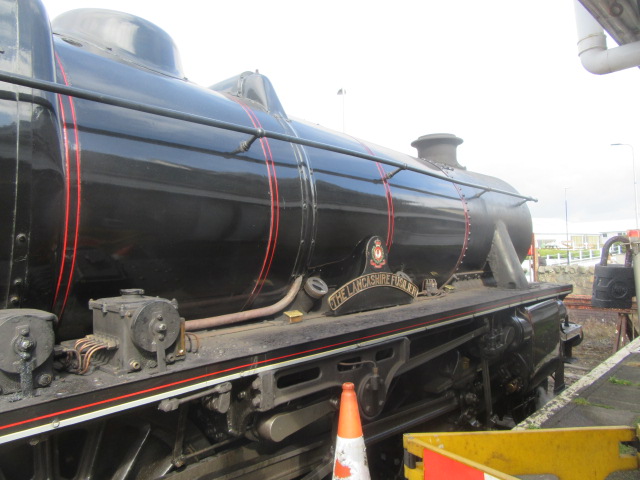 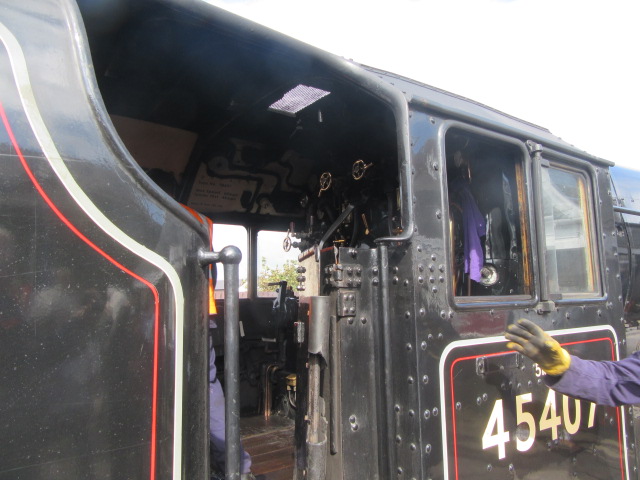 According to Wikipedia:
“The other site was the Glenfinnan memorial. It was built to honour this historic event.
Prince Charles landed from France on Eriskay in the Western Isles, travelling to the mainland in a small rowing boat, coming ashore at Loch nan Uamh just west of Glenfinnan. On arrival on the Scottish mainland, he was met by a small number of MacDonalds. Stuart waited at Glenfinnan as more MacDonalds, Camerons, Macfies, and MacDonnells arrived.

On 19 August 1745, after Prince Charles judged he had enough military support, he climbed the hill near Glenfinnan as MacMaster of Glenaladale raised his royal standard. The Young Pretender announced to all the mustered clans he claimed the British throne in the name of his father, James Stuart (‘the Old Pretender’). A MacPhee (Macfie) was one of two pipers with Bonnie Prince Charlie as he raised his banner above Glenfinnan. After claiming the throne, brandy was distributed to the assembled highlanders to celebrate the occasion.
Eight months later, the Jacobite claim to the throne failed at the Battle of Culloden on 16 April 1746.
Charles Stuart returned to the area after Culloden during his flight to evade the Government troopers of Prince William, Duke of Cumberland. After taking refuge with loyal supporters, he boarded a French frigate on the shores of Loch nan Uamh close to where he landed and raised his standard the previous year. The Young Pretender died in Rome in 1788 without setting foot on Scottish soil again. The Prince’s Cairn marks the spot from where he departed into exile.

Since 1938, the Glenfinnan Monument has been in the care of the National Trust for Scotland. The Trust constructed a visitor centre, providing tickets, information, exhibitions, a shop, café, and toilets. The tower is also a monument to Alexander Macdonald, but he perished before its completion. Jacobite enthusiasts gather at the tower each year on 19 August to remember the Rising of ’45.”

You are also able to walk up the stairs to the top of the 60m tower. 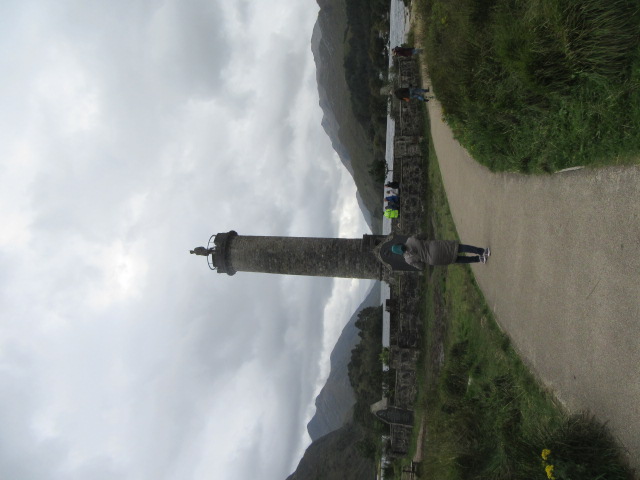 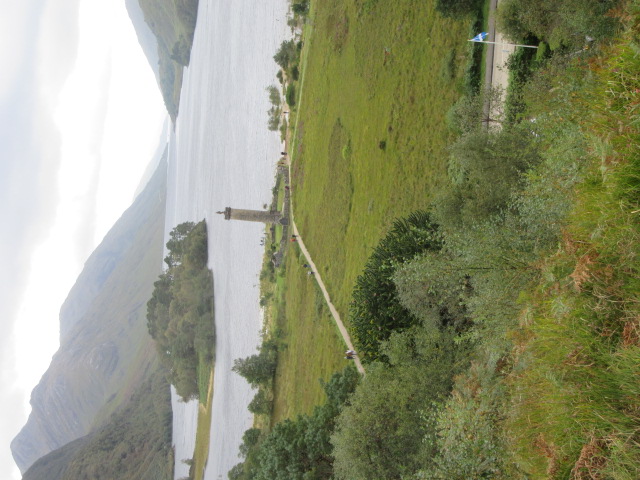 From Glenfinnan, we headed to the Eilean Donan Castle. Unfortunately, for reasons I can’t remember, we were unable to tour the castle.

We travelled past the Five Sisters of Kintail, an impressive mountain chain and past Ben Nevis, Britain’s highest mountain, to Fort William for lunch. Fort William very busy, especially in the summer months, because of its proximity to Ben Nevis. It is known as the outdoor capital of the UK for its hiking and mountain climbing.
Our last stop was at Glencoe. The site of the massacre of the MacDonalds by the British and the Campbells. According to historians, Clan Donald was a considerable force within the Highland clan system. It was the largest of all clans. 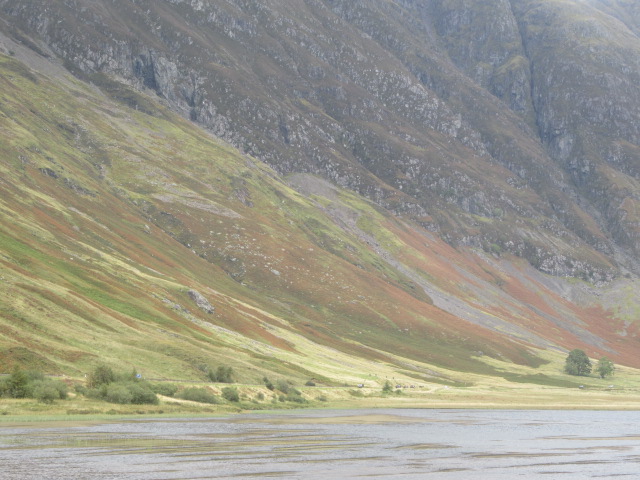 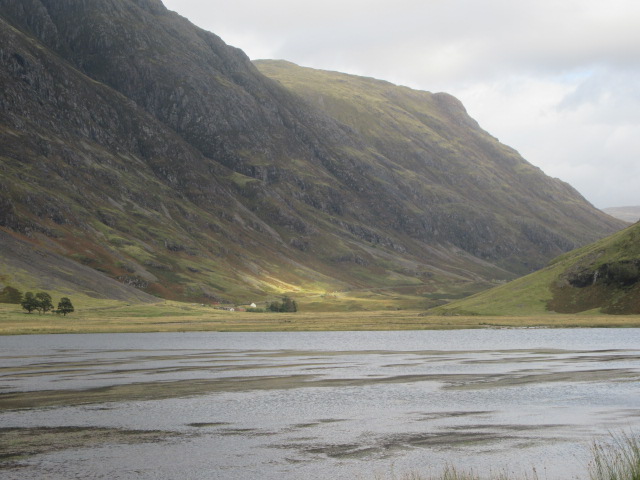 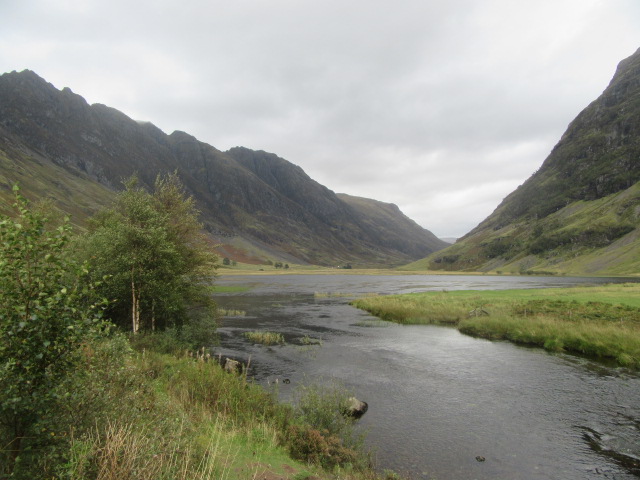 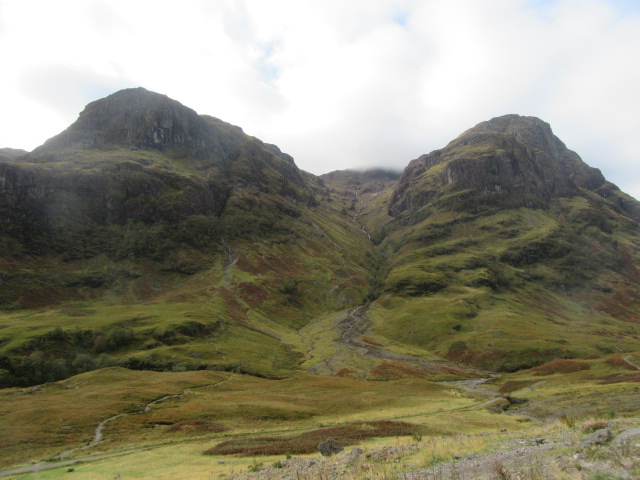 The mountains where the MacDonalds fled only to have the majority die from the cold. 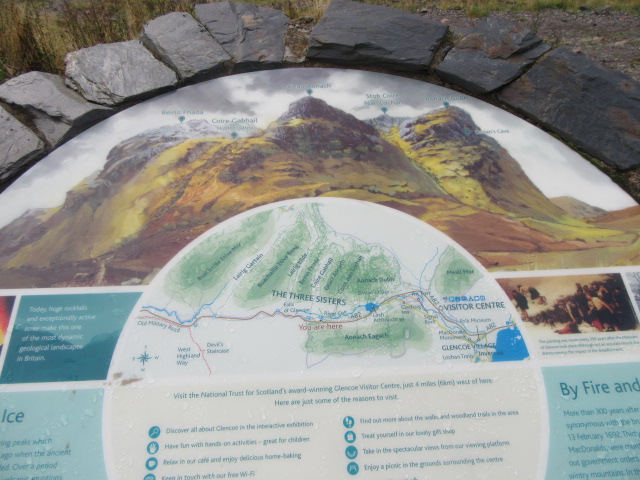 The MacDonalds, also known as Maclain’s, was always in trouble with the law and neighbouring clans for their raiding, pillaging and cattle rustling. In particular, with the Campbell clan.

There were a lot of clans who were a threat to King William of Orange. Many openly swore their allegiance to the deposed James VII. To secure support, King William ordered that the clan chiefs sign an oath of allegiance to him or would be punished with the “utmost extremity of the law.” This was to be done by January 1, 1692. This deadline was set by John Dalrymple, who disliked the Highlanders and viewed their whole way of life as a hindrance to Scotland. He particularly disliked the MacDonalds of Glen Coe.

Some clans already bound by an oath to James Stuart weren’t released from that oath until December 28th. This left them only a few days until the cut-off date of January 1.

The clan chief, Maclain, left for Fort William in the worst of winter to sign the oath. He was turned back by Colonel Hill, who explained that the oath had to be taken before a sheriff. Other clans did so by proxy, but only the MacDonald clan was excluded from the Scottish Privy Council’s indemnity. That meant a 60-mile trek to Inveraray, the principal town of his enemies, the Campbells. He did not make the deadline. Orders were given for the MacDonalds to be slaughtered. “cut off root and branch.”
Three regiments were expected to carry out the orders—two from the Campbell-dominated Argyll regiment and one from Fort William. Two of the regiments never made it in time, claiming that they were delayed due to weather. The one regiment, with commander Captain Robert Campell, carried out the order.

In late January 1692, two regiments of around 120 men arrived in Glen Coe 12 days before the massacre. They were seeking shelter, declaring that the fort was full. The MacDonalds, honouring the Highland hospitality code, gave the soldiers shelter in their own homes. For 12 days, they lived together with neither the clan nor the soldiers knowing what lay ahead.

On the evening of February 12th, orders were given to the soldiers to kill all MacDonalds. As the clan slept, the soldiers systematically killed everyone they could. Thirty-eight lay dead. Some escaped into the mountains, where another 100+ perished in the frigid weather. Others escaped. It was believed that some of the Campbell soldiers, disgusted by their orders, alerted some families.

The matter was soon forgotten by the government, but it became a legend mostly because of its brutality in Scotland. It remains a powerful symbol for a variety of reasons. Texts published since the massacre have argued that the Campbells can’t be wholly responsible for the tragedy; however, “No Campbells” signs can be found in the Highlands.

Being at the site of the massacre brought so many emotions. It is a horrific story, but perhaps it struck me harder as I am of MacDonald descent. I was raised to be proud of my heritage.