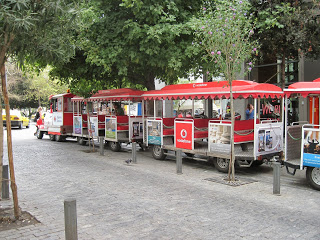 Getting around Athens was very easy and inexpensive. I was a little concerned that there would be a language barrier but most of the signage was in Greek of course but also in English. Many Greeks speak English, especially the younger generation.
The subway station was a convenient 1 ½ blocks from our apartment. We got off in Syntagma, where the parliament buildings are plus what appeared to be a Health Fair where the vendors were promoting every health aid and natural product that you could imagine. I sampled a lot of things and I am sure that by the time I left the area I was much healthier! I did buy olives in honey and Greek olive oil with garlic although I am not sure what the health benefits are with the olives in honey!
A few blocks away was the city centre. We decided to take the little train that winds in and around the city. The cost was only 6 euros and well worth the money for the hour-long tour. You can hop on and off this train as many times as you want. Good bargain! We saw more of Athens than we would have if we had been walking. 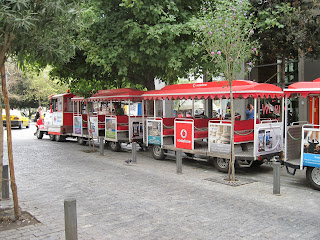 Another good find were the restaurants on the stairs. So typically Greek. There did not seem to be many tourists there and it was fun watching the locals. 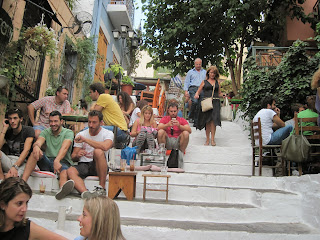 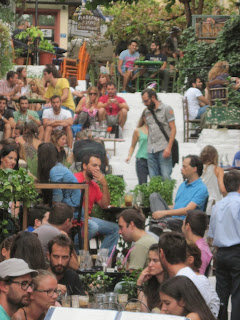 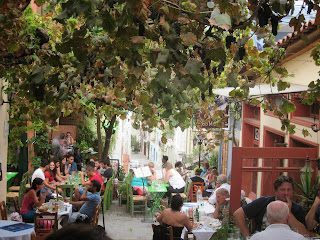 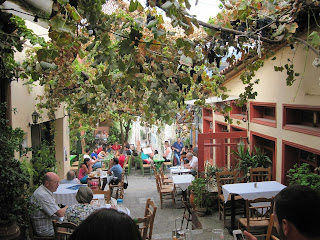 We were back on the subway and after a few stops realized we were going the wrong way. No problem, we just got off and took the correct one. When we reached our destination and walked up the stairs, I noticed a lot of people hanging around the station. I thought it was strange but then thought that perhaps it was rush hour or whatever. We walked across the street when all of sudden people were running and screaming towards us, telling us to go, go! So we ran. When local people are running and screaming, you follow suit. We headed towards our apartment. I wanted to stay behind and find out what was going on but cooler heads prevailed and we got into our apartment. We heard shouting and chanting and then saw the police. We heard gunshots and then the noise of tear gas being released. We could only see a bit from our balcony but we were prepared to head indoors if the gas fumes headed our way.
We were not going to go to our favourite restaurant as it was much closer to where the riot was but everything calmed down and we decided to go. Nothing else happened that evening except great food, wine and good times.
https://www.thetravellinglady.ca/wp-content/uploads/2013/09/IMG_1235-1.jpg 240 320 TL_Admin https://www.thetravellinglady.ca/wp-content/uploads/2016/11/logo-300x71.png TL_Admin2013-09-30 10:36:002017-10-20 18:05:00Getting Around Athens
0 replies

Another Night in Athens
Scroll to top