“But the most beautiful things in life are not things. They’re people, and places, and memories, and pictures. They’re feelings, and moments, and smiles, and laughter.”  Anonymous

I have to start my experience in Portugal with Fado. I was absolutely smitten from the first time I heard it. It is a style of music like no other. It is mournful and stirring. There are newer Fados that are more upbeat, which are just as lovely to hear. My Fado experience began with a three-hour tuk-tuk tour, and one of the places my guide took me was to a very tiny bar with a male Fado singer. We were sitting near the door and you can see how close the bar is. I would have loved to go to other bars and restaurants like this.

One thing that struck me while I was listening to my first Fado was that no one spoke. The tiny bar was in total silence. When I asked my guide why she politely put her finger to her lips to silence me. Later, I found out that there is an unwritten rule that there is no talking, ordering drinks, or eating. You are to put your utensils down. Also, you are not to enter a bar/club until the singer has finished. I thought that was a great set of rules. It shows respect for the performer. It reminded me of a time in Mexico when we went to hear a very talented guitarist. Even though it was held in a bar, the band was set up on the dance floor, and dancing was discouraged. There were people seated behind us who talked through the whole performance. It was very annoying. Why bother to come to a concert if you do not intend to listen?

I did not understand any of the words that were sung, but the emotion being expressed was universal. It was impossible not to be moved. If you listen carefully, you will feel a bit of the meaning even if you do not understand the words.

Fado has a fascinating history. The famous Fado singer, Amália Rodrigues said “The Portuguese invented Fado because we have a lot to complain about. On one side, we have the Spanish with their swords; on the other side, there’s the sea, which was unknown and fearful. When people set sail, we were waiting and suffering, so Fado is a complaint.” As a homage to Amália Rodrigues and Maria Severa female Fado singers usually wear a black shawl and bright red lipstick. According to one website, Maria Severa worked as a prostitute. She was described as tall, gracious with the voice of an angel. Her voice would capture audiences of rowdy sailors while she sung Fado based upon the hardships she had faced. She died from tuberculosis in 1846 at the age of 26.

Fado has been dominated by female singers, but recently more men are becoming Fadistas. The one difference is in Coimbra. Their fado is closely linked to the University and is sung by men. Both the men and the musicians wear an academic outfit; dark robe, cape and leggings. One story is that it is sung to woo the women.  As lovely as it was to hear, I preferred the fado from Lisbon. Lisbon’s fado is emotional, mournful and powerful. 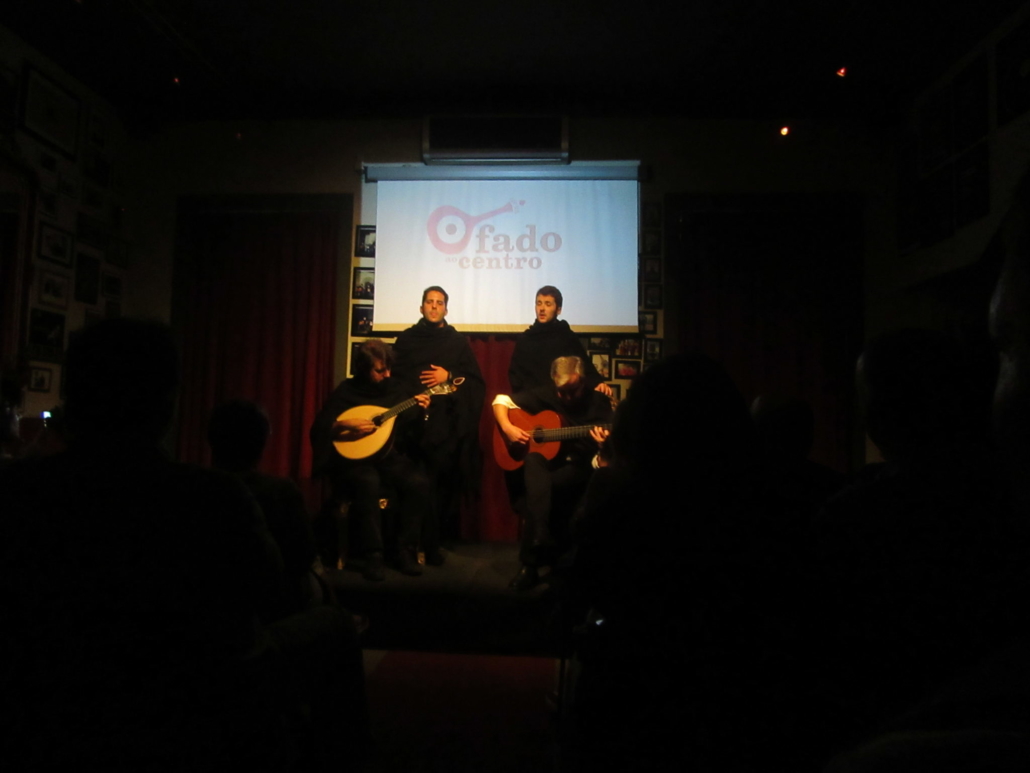 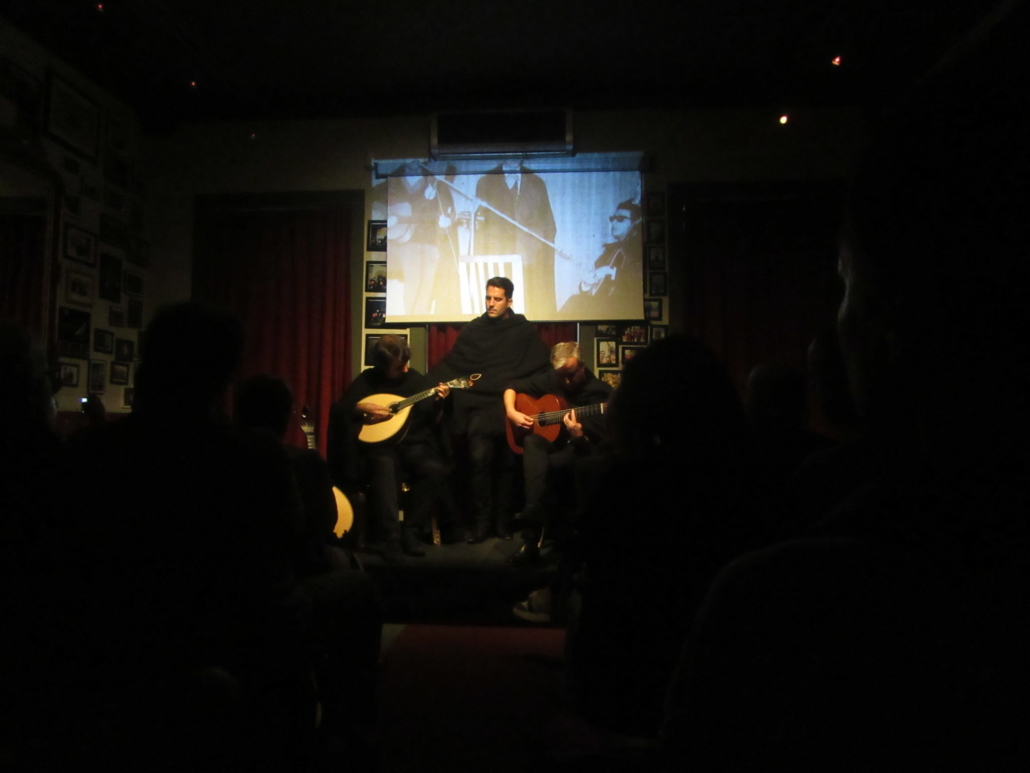 After my tuk-tuk tour, I knew I had to find more Fado music to listen to. Fortunately, my tuk-tuk guide had a brochure on a few places to listen to Fado. My first one was at the Embaixada Gallery Restaurant. It was a perfect setting to hear Fado.  The room was beautiful. There were two singers, one an “older” woman and the other a young man. I was enthralled.  After that concert, I was absolutely hooked! I tried to take videos, but unfortunately, the quality is not good. However, you will get a general feel of the place and the singers. Sadly I did not get the names of the singers.

My next concert was at Pavilháo Chinés (Chinese Pavilion). It is Lisbon’s most iconic bar. The venue itself was unique with thousands of small pieces of art, military artifacts and vintage items. There was hardly an inch that did not have something. When you first enter the bar, there is a restaurant. The room for the concert was in the pool room, which also contained hundreds of items. Unfortunately, I was on the other side of the table, but the room was small enough that it was not a significant problem.

Isabelinha was the Fado singer that evening. She was excellent. Isabelinha also took time to explain about Fado to the audience. Below is a link to a Youtube video of hers that will show you her talent.

Accompanying her was Bernardo Couto on the Portuguese guitar and Pedro Saltac on the classical/ Fado guitar. They too were excellent. Unfortunately, I could not find a video for Pedro Saltac.

Here is the professional video of Isabelinha

When I first decided to go to Portugal, I must be honest and tell you that my decision to go there was first based on the proximity to Morocco where I first would be taking a tour. Portugal was not high on my list of countries to see. I thought it would be interesting but nothing more than that. Fado was my first introduction to my love affair with Portugal. I would gladly return to see more of Portugal, which I don’t say of some countries.

Sung with passion, Fado will touch you.