SANTA MARIA DE TULE
We must go beyond textbooks, go out into the bypaths and untrodden depths of the wilderness and travel and explore and tell the world the glories of our journey.  John Hope Franklin
On the church grounds in the town center of Santa Maria de Tule in the Mexican state of Oaxaca stands the world’s largest tree. It is a Montezuma Cypress and has a circumference of 137.8 ft. The age of the tree is thought to be between 1450 – 1600 years. 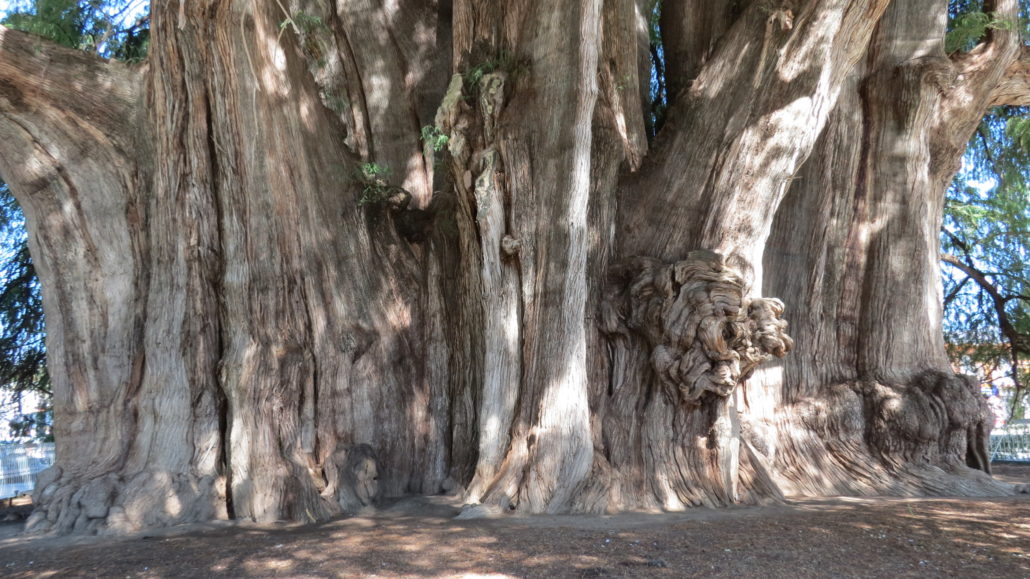 Local Zapotec legend holds that it was planted about 1400 years ago by Pechocha, the Aztec god of wind and storms. 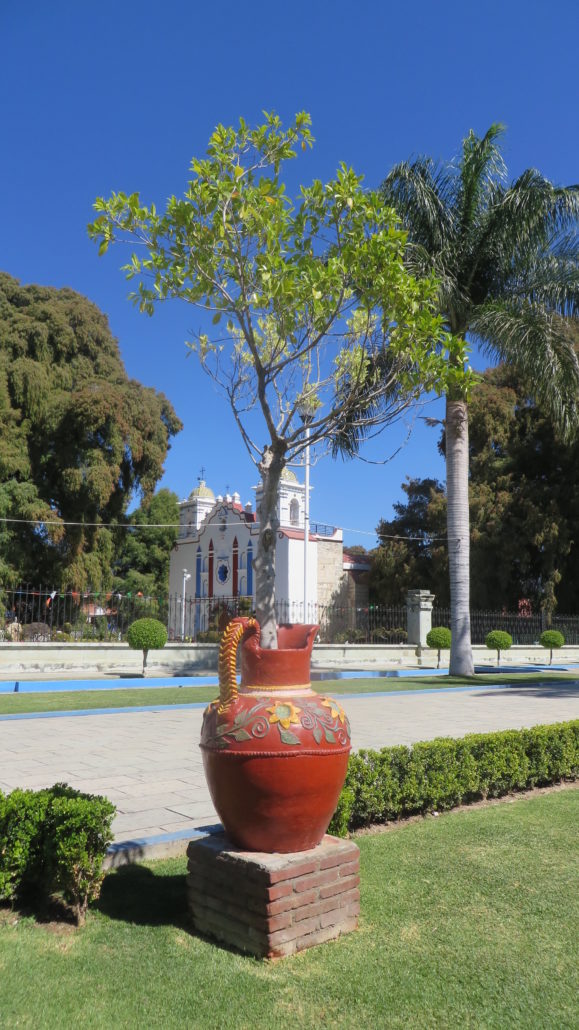 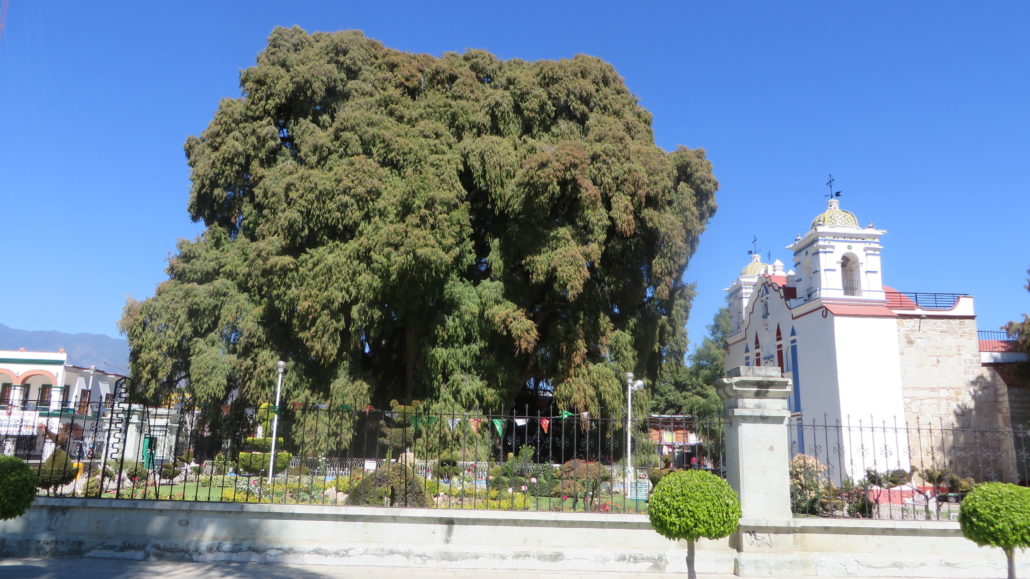 The tree has been nicknamed the “Tree of Life” because of the images of animals that reputedly visible in the tree’s gnarled trunk and branches. The local schoolchildren give tourists a tour of the tree pointing out the shapes of creatures. 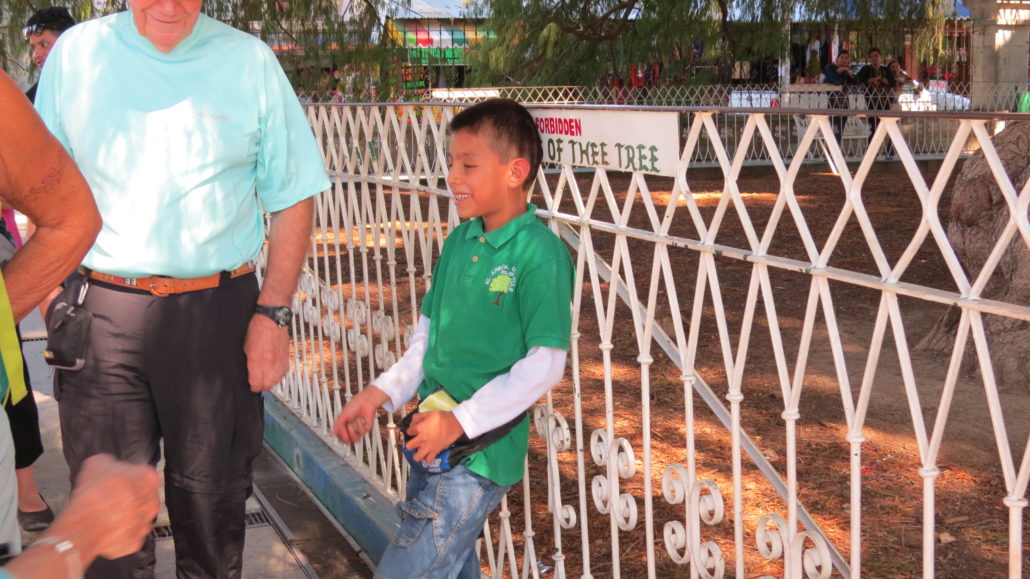 Another name for the tree is Ahuehuete, meaning “old man of the water”.
The following poem was written by Juan de Dios Peza:
The Ahuehuete of Santa Maria de Tule
How grand splendor
the sight of you, Titan
of these smiling solitudes!
When storms rock
Your crown, all the ages
Moan in your branches.
What could I possibly say to you?
You inspire me so much,
I’d rather withdraw your name
And give you instead my silence
In the form of a song: Next to
A tree like this, a man
means nothing
MEZCAL
What Mexican tour would be complete without a mezcal tasting? In the small village of Tlacolula, just outside Oaxaca was a new mezcal distillery.  Contrary to popular belief, mezcal is not the same as tequila. Unlike tequila, mezcal can be made from 11 types of agave. This diversity produces a range of flavors similar to the different types of grapes in wine making. 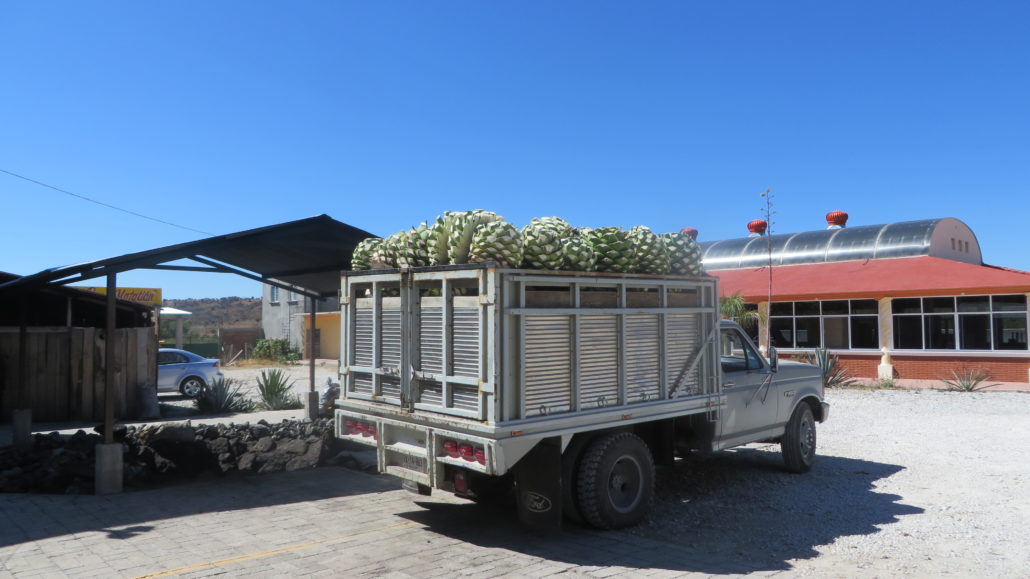 400 years ago, the Spanish conquerors taught distillation techniques to Mexico’s inhabitants. The Mexican state of Oaxaca is the official home of Mezcal. In the villages of Oaxaca, the mezcal producers still use the traditional method of roasting agave in underground wood-fired pits, and distilling in small-batch, copper pot stills.

If you are looking for a worm in the bottle, you won’t find it in a bottle of tequila as the Mexican standards authority prohibits adding insects or larvae to tequila.
According to Tequila Source:
“It seems to be a rite of passage for many to take that first shot of Mezcal or to eat the worm at the bottom of the bottle. Today the urban legend of the tequila worm continues to survive and to eat the worm has become a rite of passage for many. You may wonder how the legend got started. Back in the 1940’s, some American-bottled brands of mezcal came up with a marketing ploy. Stemming from the myth that the worm has magical and aphrodisiac properties, they decided to put a worm in their to impress the gringos and boost sales.

There are two types of worms found in mezcal: the red, gusano rojo considered superior because it lives in the root and heart of the maguey plant – and the less prized white, or gold, gusano de oro, which lives on the leaves.
In addition, to using the worm as a marketing strategy, the worm serves as evidence of the high proof of the mezcal, as the percentage of alcohol in the spirit is high enough to preserve the pickled worm.” 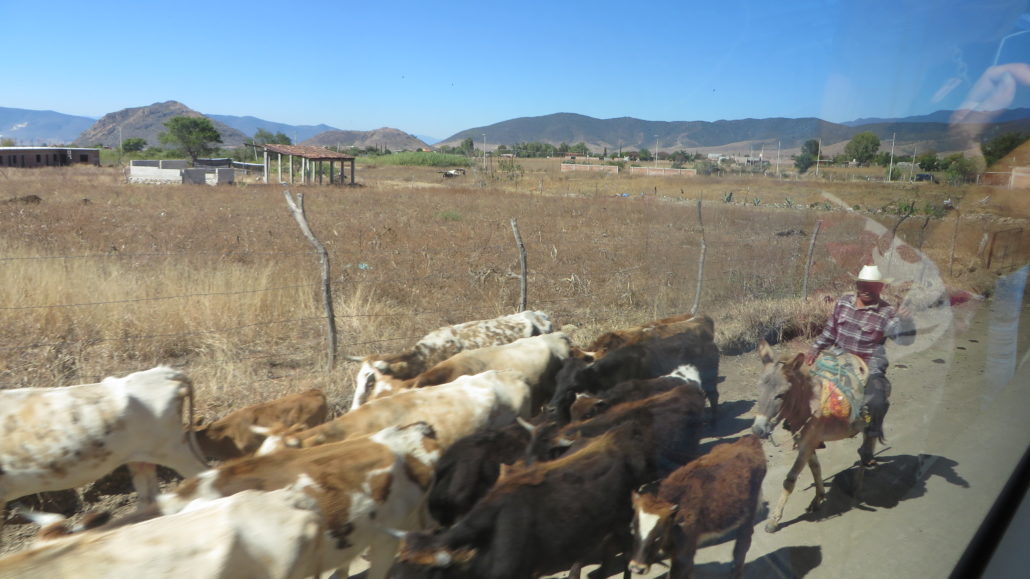