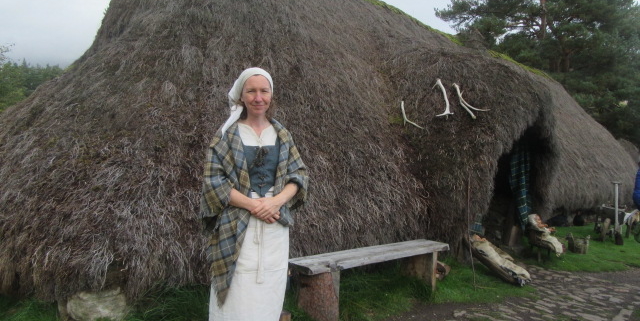 On day four, we headed to the Isle of Skye and a two-night stay in Portree. Portree is a picturesque little town on the Isle of Skye. It is the largest town on Skye. The houses are painted in different colours—a photographer’s dream.
After settling in our accommodations, we travelled north to the Trotternish Ridge. The Old Man of Storr is a well-known site on Skye. It is a 4 km hike to the rock and is rated a medium length and medium difficulty walking. Our group did not do the hike but instead went to a different area to view the rock. Legend has it that Old Man of Storr was a giant who had lived in Trotternish Ridge, and when he was buried, his thumb was left jutting out the ground, creating the famous jagged landscape. 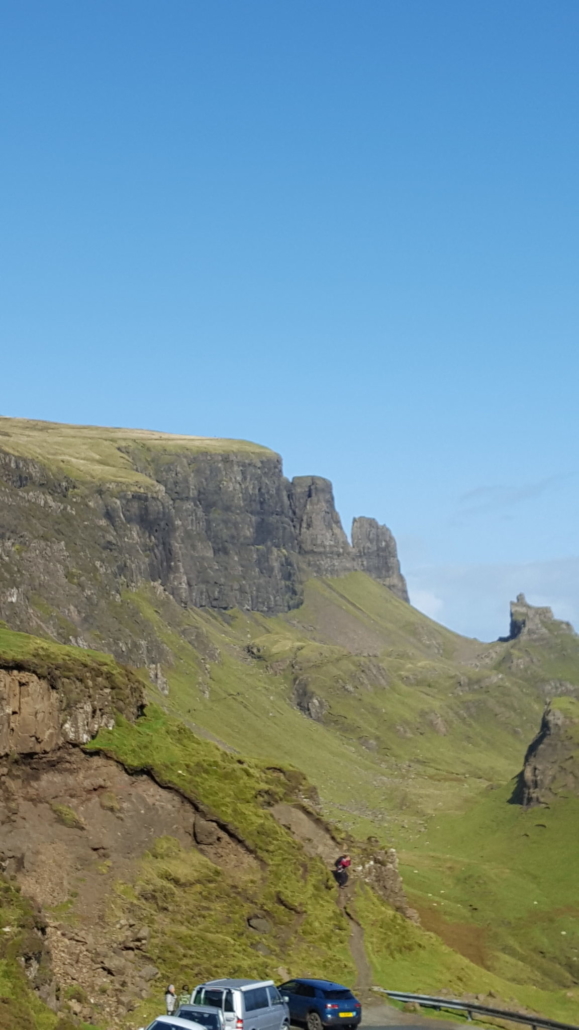 This is the best view we could get of it. 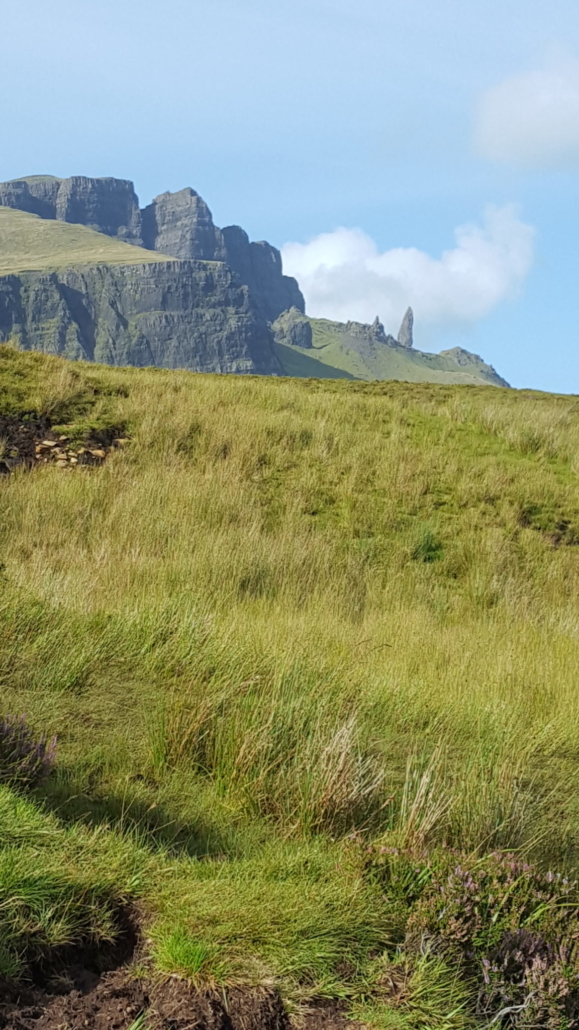 From there, we went to the viewpoint to see the Kilt rock. It does resemble a kilt. You can also see Mealt Falls. When a strong wind is blowing, you can hear a tone that appears to come from the surrounding area. The instrument emitting the eerie noise is the fencing that surrounds the lookout point. Holes facing the sea allow wind into the piping, turning the safety feature into an organ of sorts. It was an eerie sound.

The next stop was the Sligachan Bridge. The old bridge is not in use anymore. They built a newer one to resemble the old. 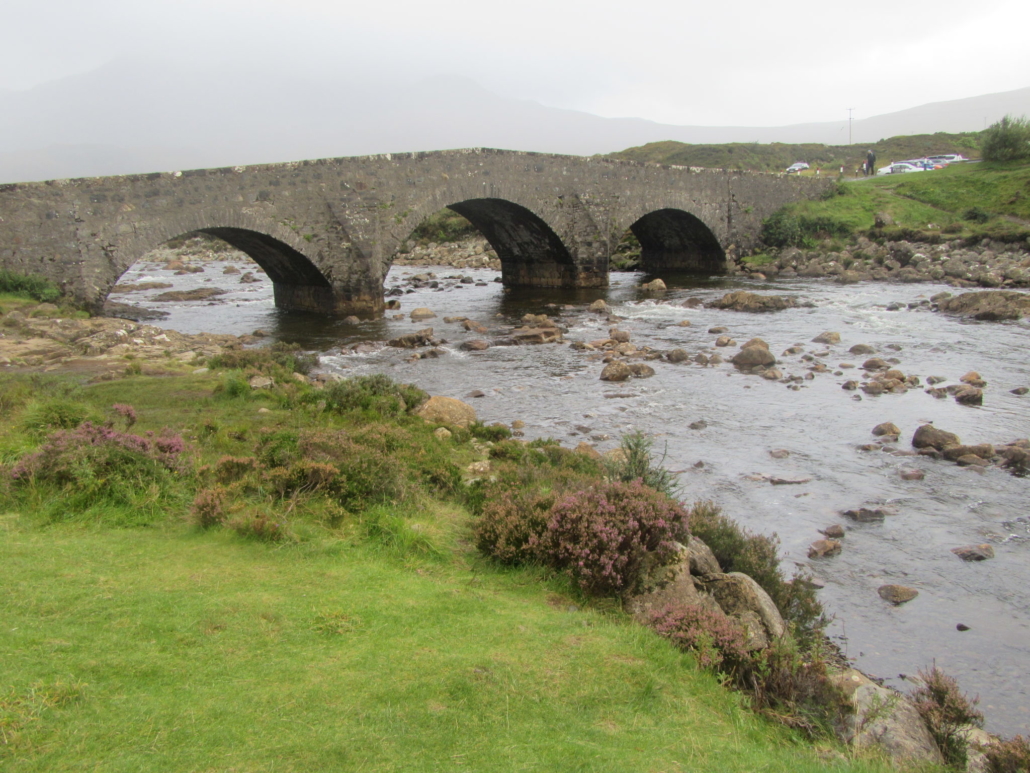 I hiked around the area. The mountains were incredible. The legend associated with this bridge and water is enjoyable. Unfortunately, I heard about the legend of this area too late to try the water treatment. 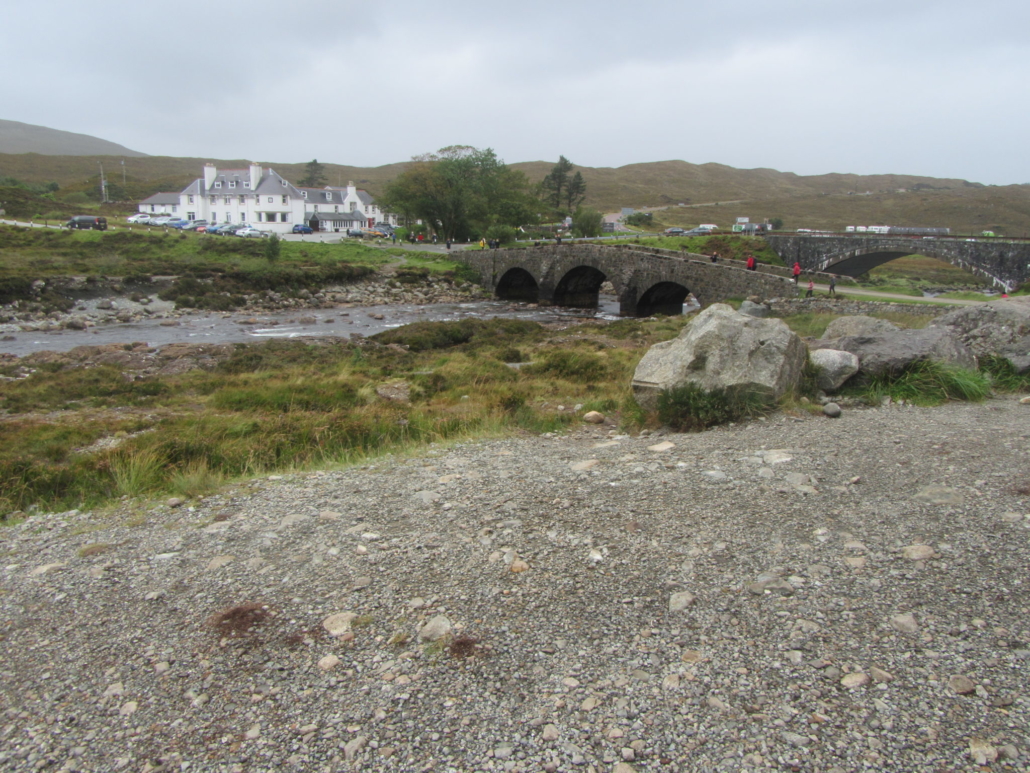 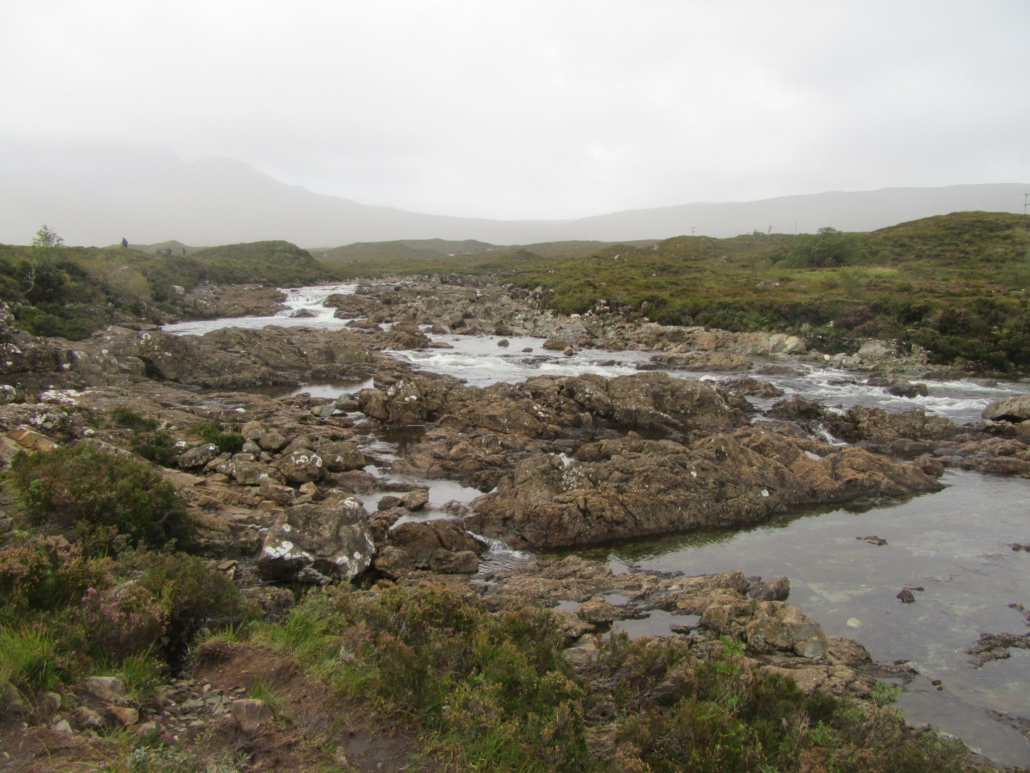 This is an excerpt of that legend from Rabbies Tour Company.

“There’s a little bridge in Sligachan on the Isle of Skye. A small stream runs below it, and you can look up to a mighty mountain.

Many travellers would never think to stop there to have a look around. It’s just another beautiful stream in the Scottish Highlands. But that’s because they don’t know this water has the magical power to grant you eternal beauty.
No, really, it does.

We’ve splashed about here a thousand times, and we’re stunningly beautiful. Or at least that’s what our mums tell us.
Anyway, the way this stream became magical is one of our favourite myths on Skye.
It’s the tale of The Enchanted Waters of Sligachan. And if you stay around for the ending, we’ll explain what you’re supposed to do in the water to gain eternal beauty.

A Famous Warrior
So, the story begins with Scotland’s warrior woman, Scáthach. She lived on Skye, and the news was travelling around the world that she was the greatest fighter in all of Scotland.
But this news travelled to the wrong people. Cú Chulainn, Ireland’s favourite warrior, had found out. He wasn’t a bad guy; he was just very competitive. He had to know if he could defeat her in battle, so he jumped across the ocean to Skye and challenged her.

But Scáthach was no coward. Even though Cú Chulainn had the strength of Hercules and was a half-god, she accepted the challenge. She even believed she could win.

This fight would be bigger than Muhammad Ali versus Bruce Lee, bigger than Terminator versus Predator; it would be the largest fight this land had ever known.
The battle raged for weeks. Valleys were moved, mountains shook, and all the animals had fled the Isle of Skye.
But Scáthach’s daughter couldn’t take it anymore. She was upset beyond belief and ran down to the stream to cry.
She shouted, “please, somebody stop this fighting. I can’t stand it anymore”.
And she was in luck.

A Delicious Resolution
The fairies of the river had heard her. They beckoned her to dunk her face in the stream for seven seconds to discover how she could stop this terrifying battle.

She did as they asked, and the fairies blessed her with the knowledge of what to do.

Her legs pattered across the land as she ran around Skye, finding herbs, meats, nuts, and every delicious thing that this small island produced. She then brought them home and stewed up the most delicious broth you could imagine.
The smells of this meal were incredible. The scents travelled far and were so delicious they could make you hungry again after a ten-course Michelin-starred feast.
The fighting warriors smelt it and couldn’t fight on. Their saliva glands were gushing faster than the Niagara Falls. So, they agreed to take a break to enjoy a feast.

Scáthach and Cú Chulainn arrived at the house and scoffed up the food like they hadn’t eaten a meal in their entire lives.

The feast marked the end of the battle. By eating in the home of Scáthach, Cú Chulainn had become a guest. Cú Chulainn was no animal; he had been raised with good manners and knew the rules of Celtic hospitality: you can’t fight someone who has hosted you…ever.
So, there, the battle ended.

A Portal to the Fairies
But the fairies of the river had been disturbed by this battle forever. So, by dunking your face in it, you transport a part of yourself into the underworld and attain eternal beauty.

Here’s how you do it.
Firstly, don’t be a coward. Get on your knees and dunk your entire head in the stream for seven seconds.
And secondly, don’t dry your face. Let it dry naturally, so you absorb all of the fairy goodness.”

There are many slightly different versions of this legend, but I enjoyed the Rabbies Tours one more. Now I wished I had dunked my head into the water. I will the next time.

Our next stop was to the mountain pass of the Quiraing. I did not take the path up the mountain but chose to hike around the base. It was extremely windy. I was surprised that the wind did not pick me up and blow me over the hill.

One fun stop on the Isle of Skye was to the Talisker Distillery. I am not a scotch drinker, but my husband likes it. Jim, our tour guide, had a standing table reserved for us. He showed us the correct way to drink scotch, and if you don’t care for the taste, how to add one drop of water at a time until you do like it. No more than four drops. I used all four.

Our group went out for dinner and then back to our accommodations to get a good night’s sleep for our next day’s travel.