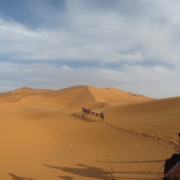 “Take every chance you get in life because some things only happen once.” Karen Gibbs

‘They spit, and they smell’ I was told when I mentioned that I was going to ride a camel. I didn’t care. Heck, I even bought what I called my camel riding outfit. 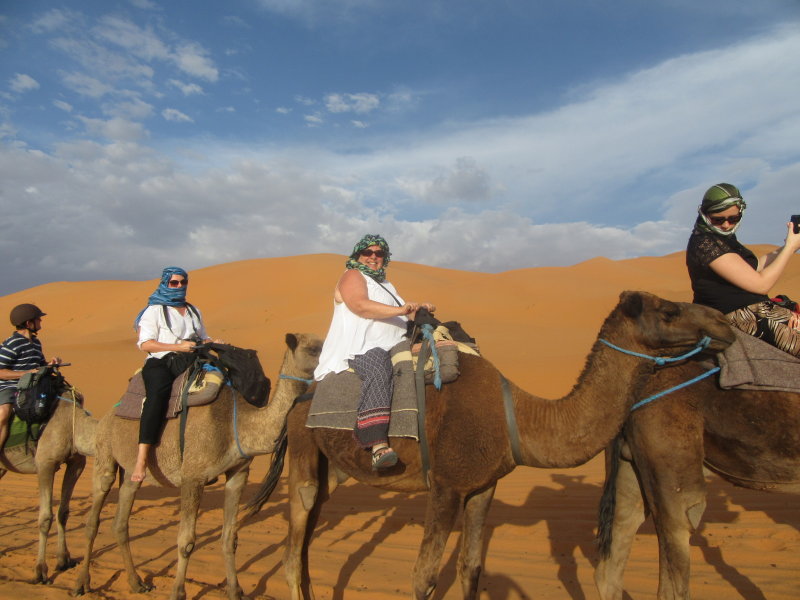 The trip from Fes to Merzouga took 11 hours. The landscape was beautiful and unique. The trip was enjoyable, and we made frequent stops for refreshments and other necessities.

We arrived at the dunes of the Sahara desert. Our desert auberge (simple hotel) Auberge Yasmina, was located at the edge of these dunes. My very generous room included a separate sitting room and upstairs was a private viewing deck. We settled in and had a lovely dinner with entertainment. 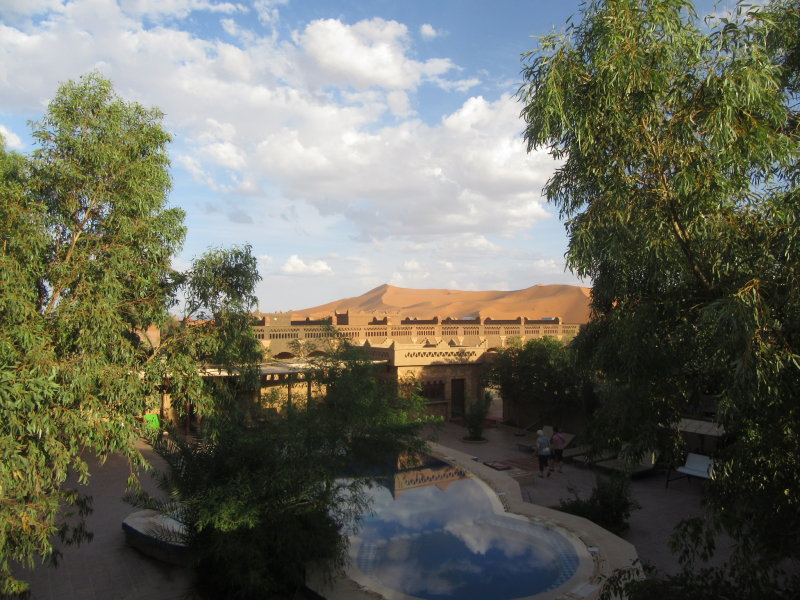 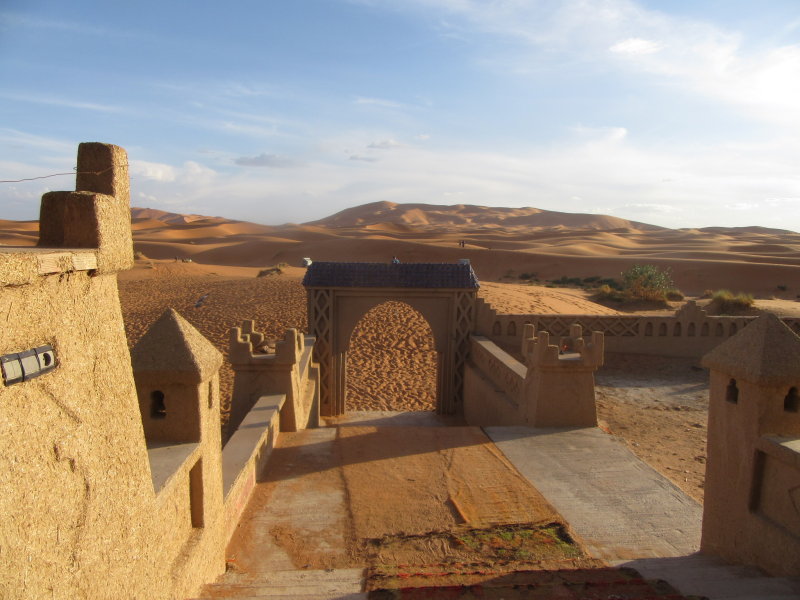 The next day a few of us decided to go on a 4 x 4 excursion. I imagined we would travel directly to our points of interest but no. The driver and the rest of the group decided we should try 4 x 4 ing up and over the dunes. The first couple of times I KNEW I was going to be injured or killed. I was terrified. After a few more dunes I finally realized that no, that wasn’t going to happen and started enjoying it. I was whooping along with everyone else.

We finally got to our first destination which was a nomad camp. There was only one nomad family camped here. The man had three wives. At least that is what he admitted. Apparently, three is the legal number of wives men are allowed to have legally. There have been recent laws governing that topic. One law states that the husband must ask permission of the first wife if he wants to take a second wife. I think that with the nomadic lifestyle the laws are a bit looser or he may have had the three wives before the laws changed. One of the wives had just given birth to twins a week previous. I was surprised that she wanted me to take a picture, but I think it was the promise of money that made her so agreeable. A goat was being skinned for the upcoming celebration of the births. 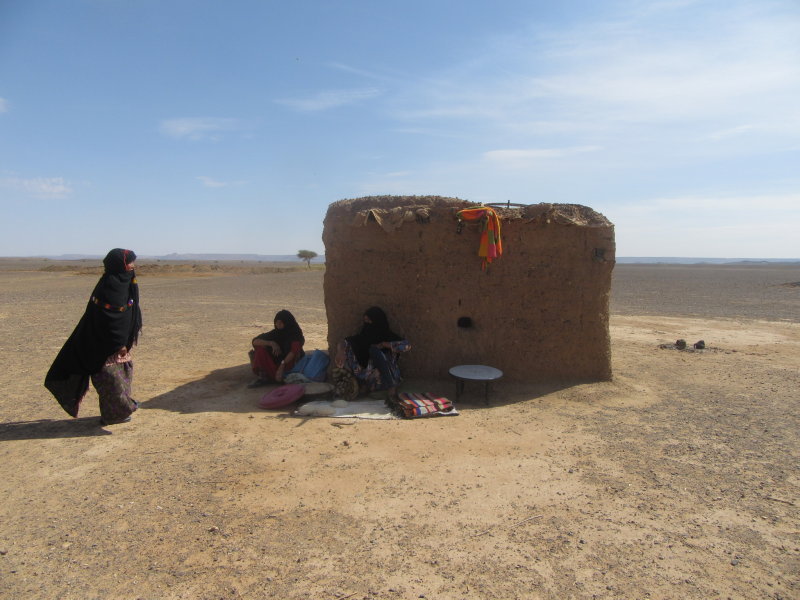 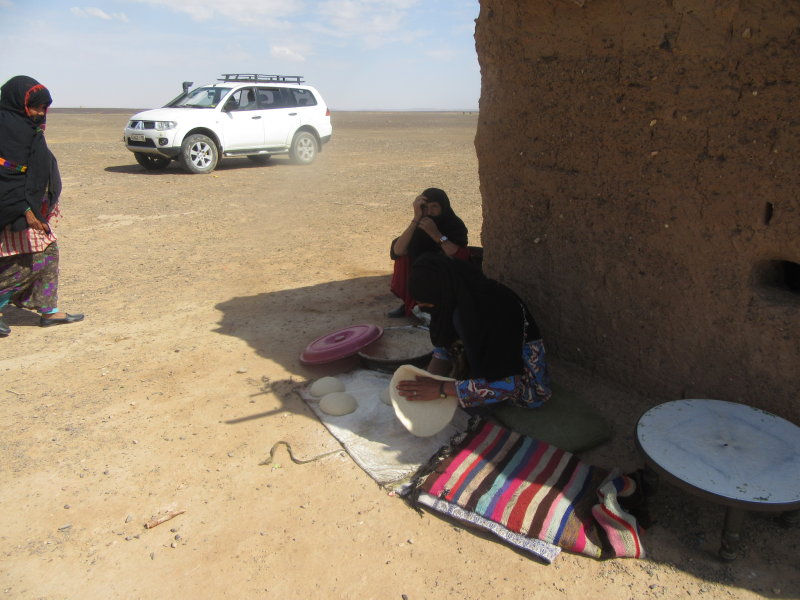 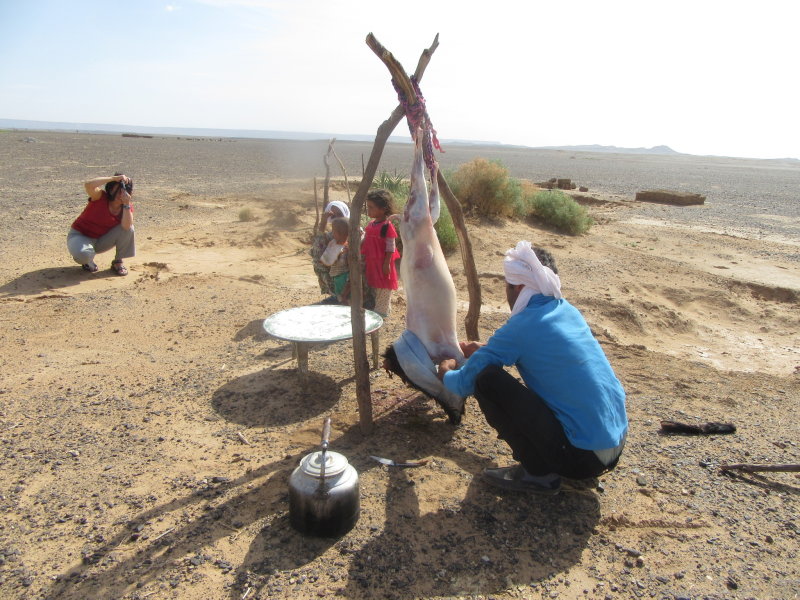 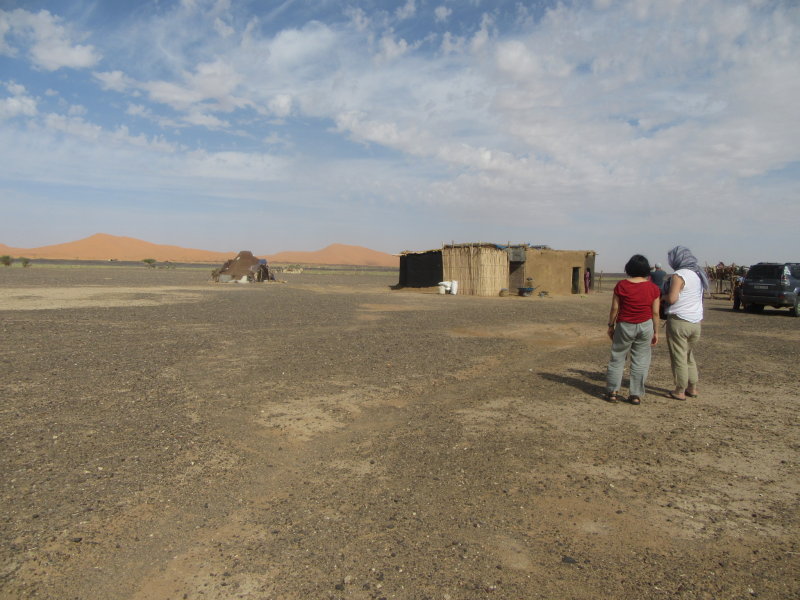 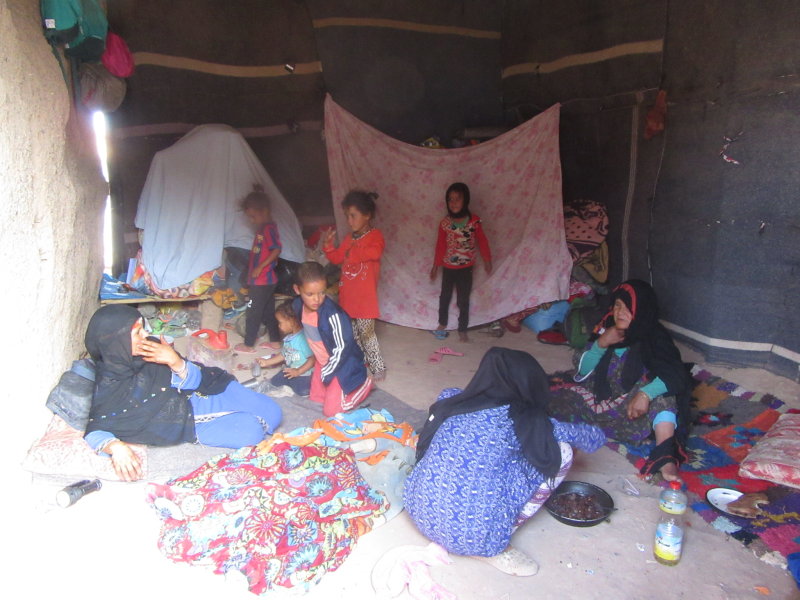 Hard to see the new baby under the blanket 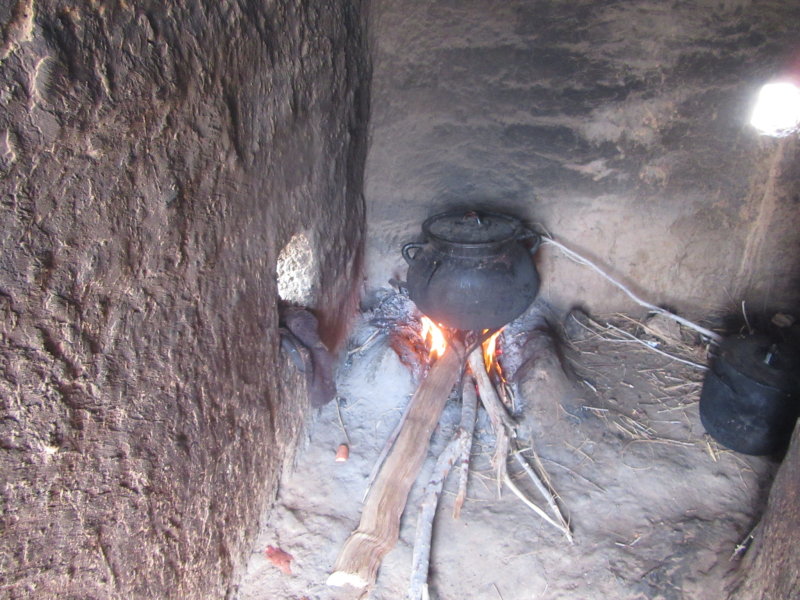 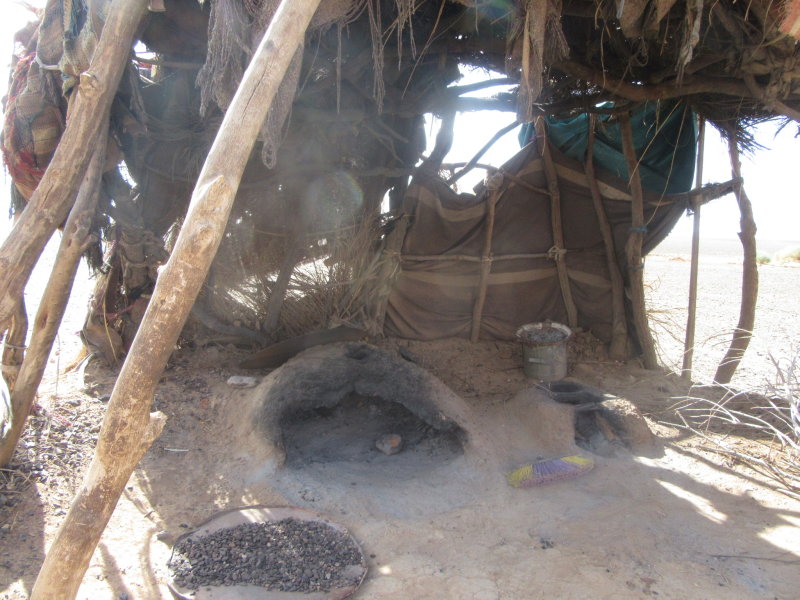 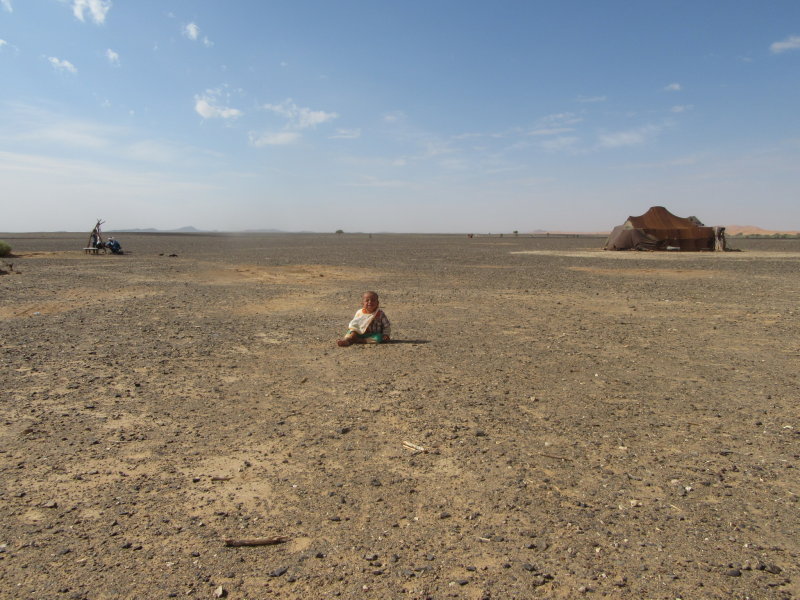 We were invited to have tea, and this gave us the opportunity to ask our local guide a few questions. One person asked how they were able to send out the invitations for the celebration. Now, you should understand that we were in the middle of nowhere: no telephone lines, nothing. We were all thinking the same way. We were caught up in the moment. Our guide responded, “by cellphone.” We burst out laughing. 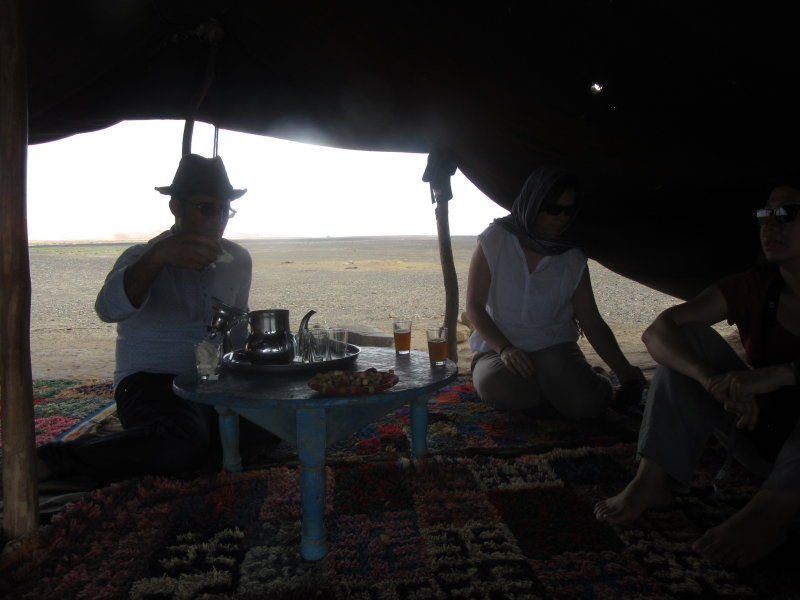 The next stop was to watch local entertainers. They were all dressed in white and played instruments that resembled large castanets. The cutest little boy was trying to play one of them. We danced a bit, had more tea – tea is the main beverage in Morocco. 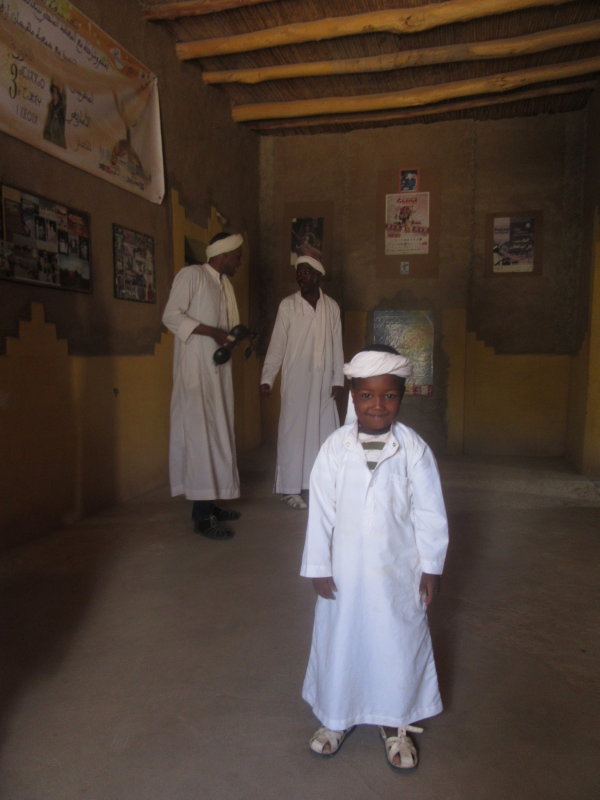 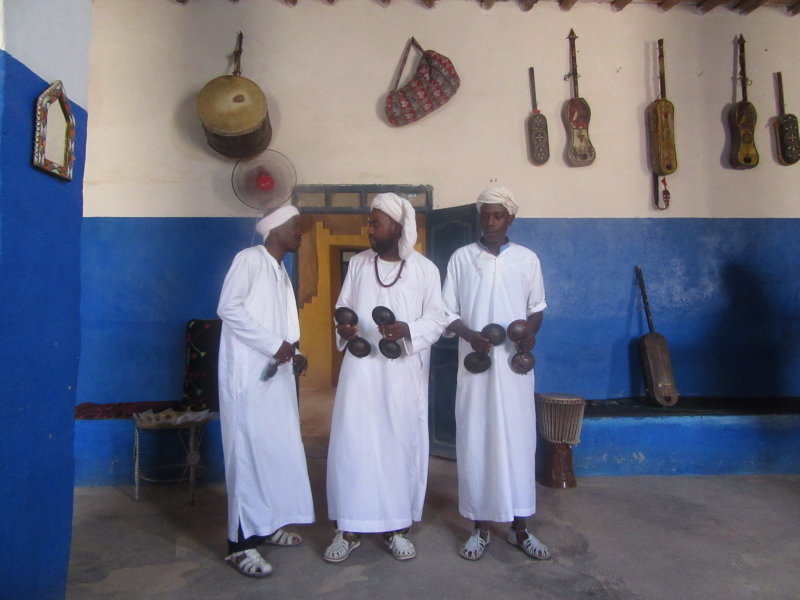 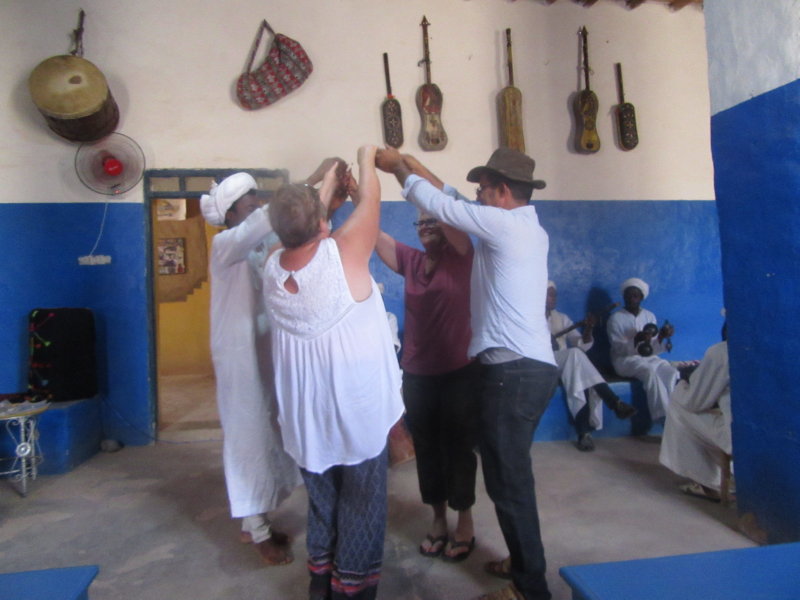 Not sure what the heck I was doing but it was fun!

We headed back to the hotel to get ready for our camel ride where it was an hour long swaying ride from the hotel to the desert campsite. The hotel has a pretty efficient system for groups. You pack an overnight bag and leave the remainder of your luggage in a secure room. The next day, you can have a shower and retrieve your belongings before you head out on the road again.

I put on my camel riding outfit, packed an overnight bag and I was ready! My camel did not spit nor did he/she smell that I could tell. My sense of smell is not great.  It was not difficult getting on the camel. The hardest part was when the camel started to stand. The guides tell you to lean back, but I was still not prepared for the sudden propelling forward as the camels started to stand with their hind legs. I, however, did not fall off. That was a good beginning. 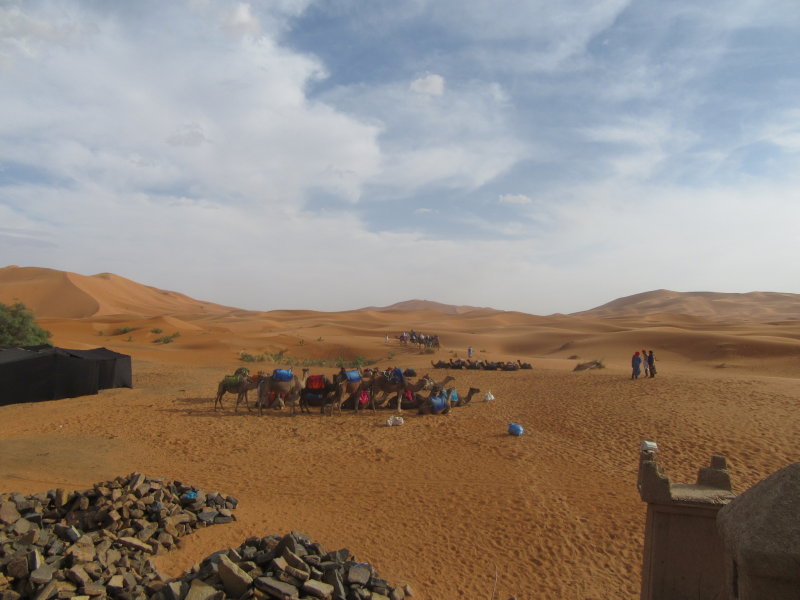 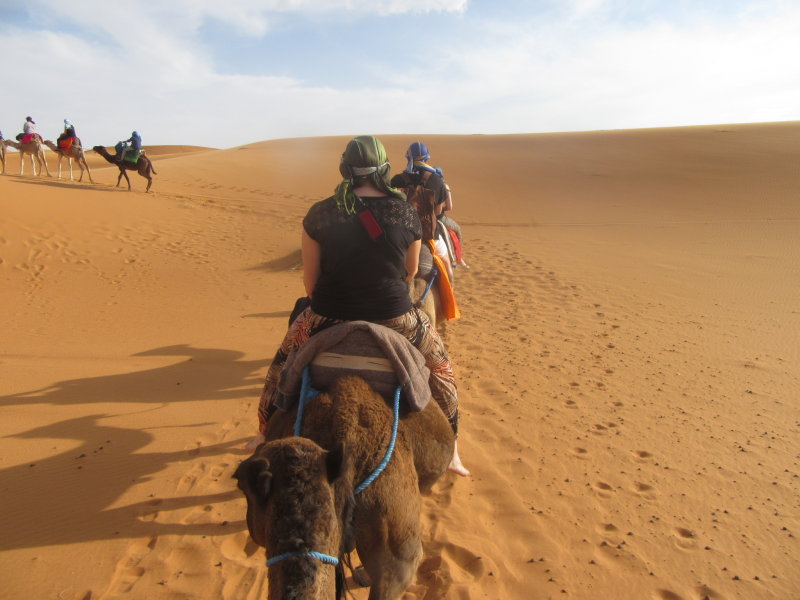 We headed out just before sunset. I have no words to describe the intense beauty of the dunes. The views take your breath away.  I wanted the ride to go on forever. Riding a camel is a lot easier than riding a horse, and the hour-long trip was over sooner than I wanted. 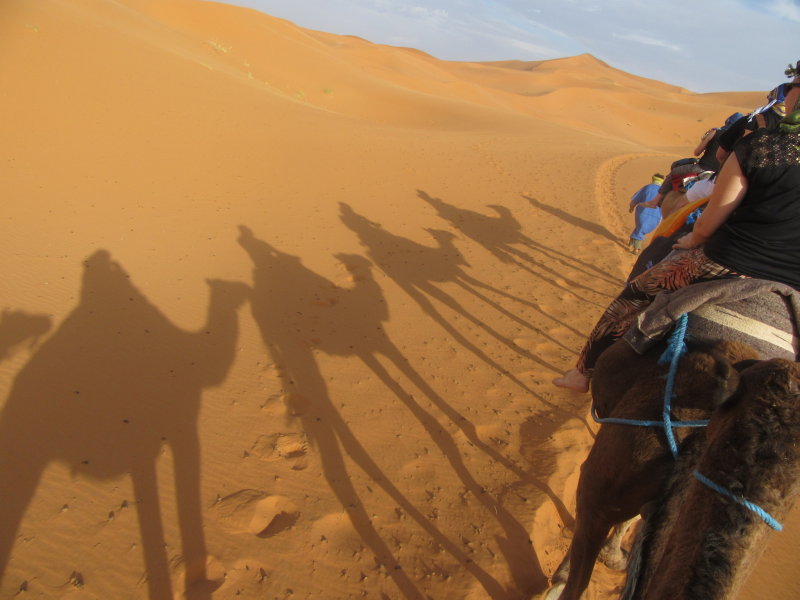 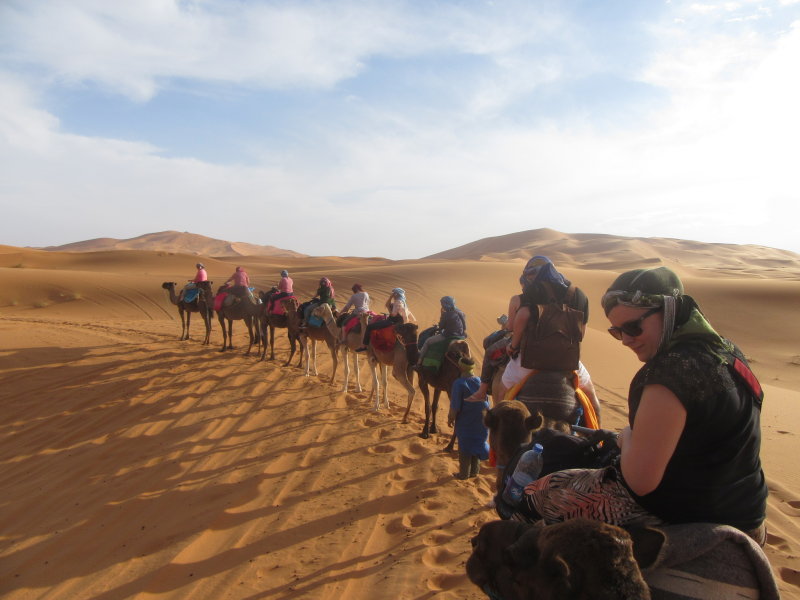 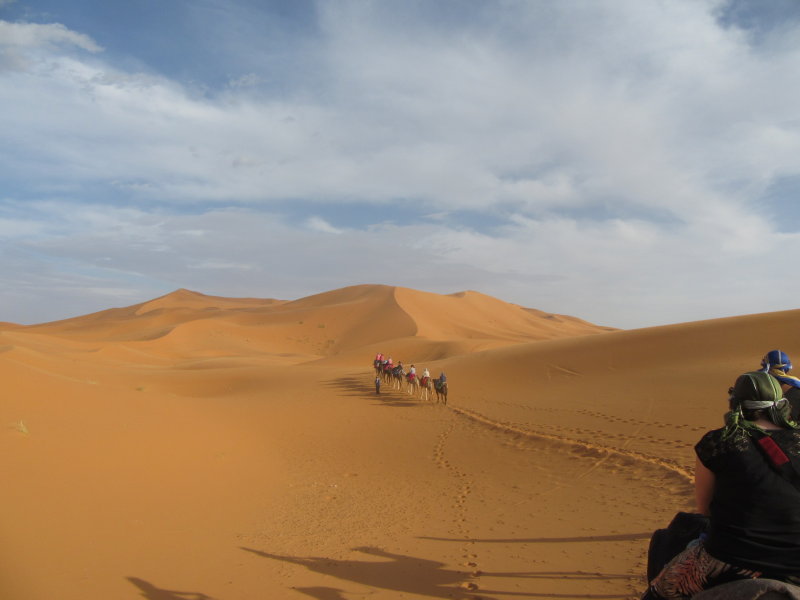 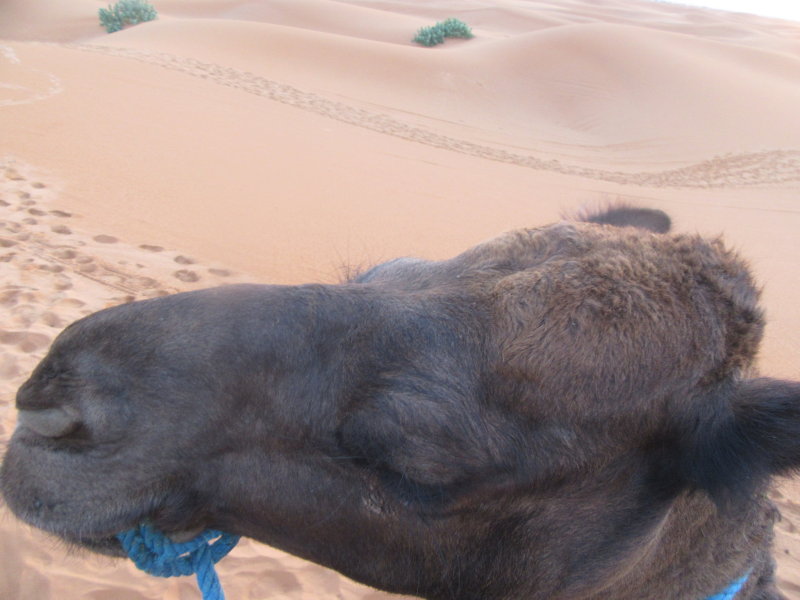 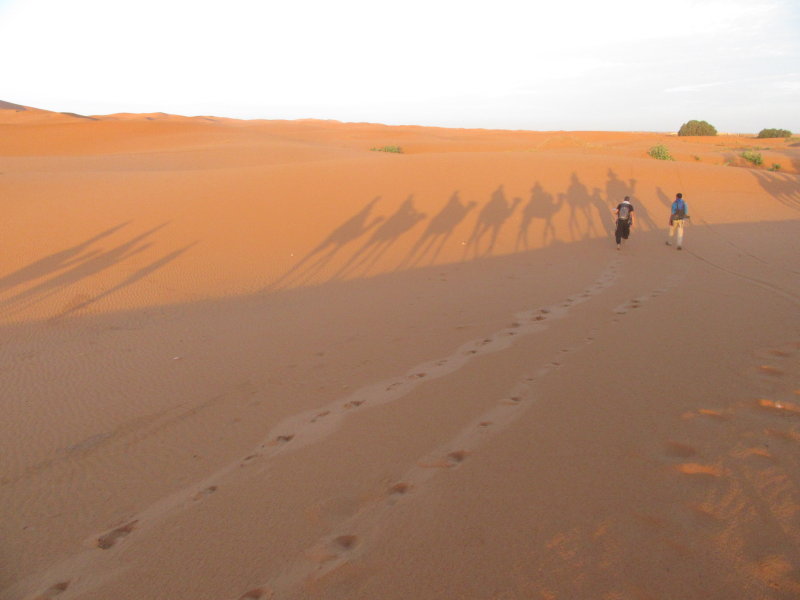 We arrived at our campsite just as the sun was going down. We settled into our tents, and then some of the group decided to climb up one of the dunes to watch the sun go down. We had a tasty dinner and sat around talking for a bit. Another group arrived just as we were starting to settle in for the night. They were a little more rambunctious than our group talking and laughing most of the night away. We just wanted to get some sleep. It was an early morning rise as we were leaving our campsite at 6 am.  The ride back was just as impressive, and we were able to watch the sunrise. Once we were back at the hotel, we showered and gathered our belongings for the next destination. This adventure is one that I will not soon forget. 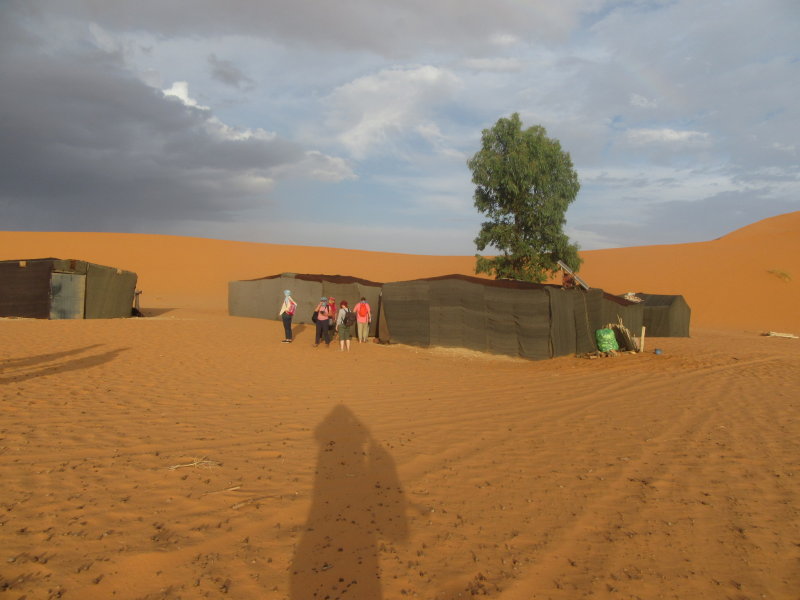 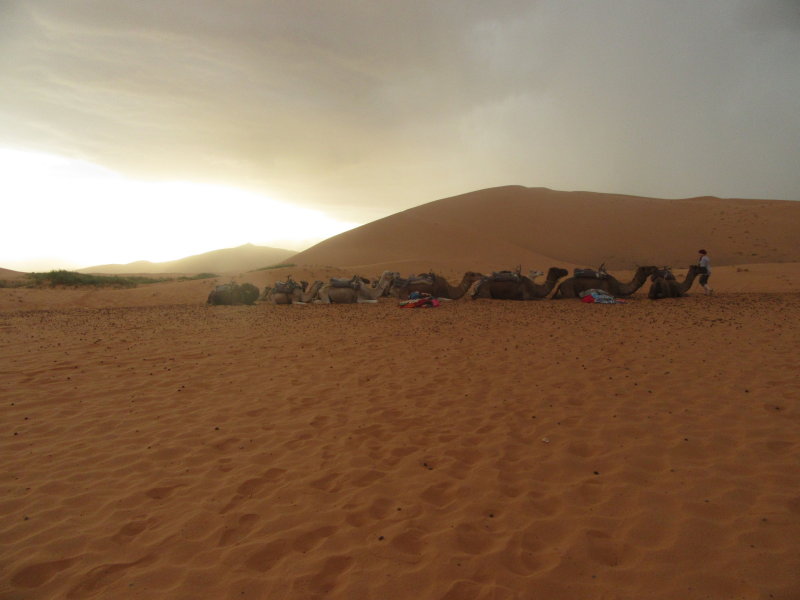 Camels resting for the night. 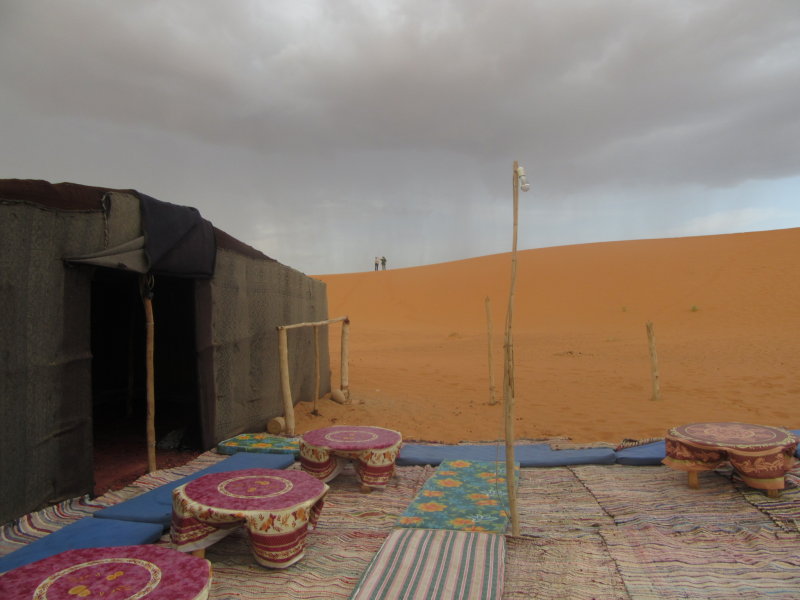 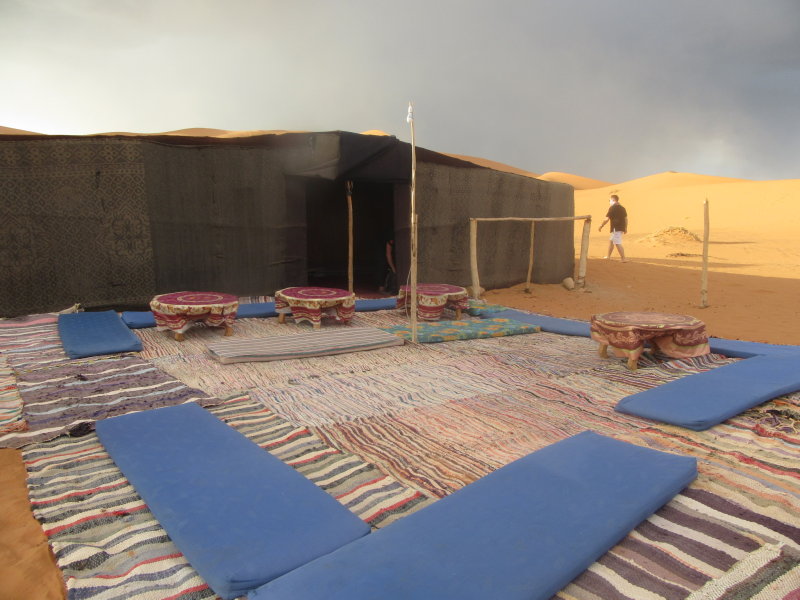 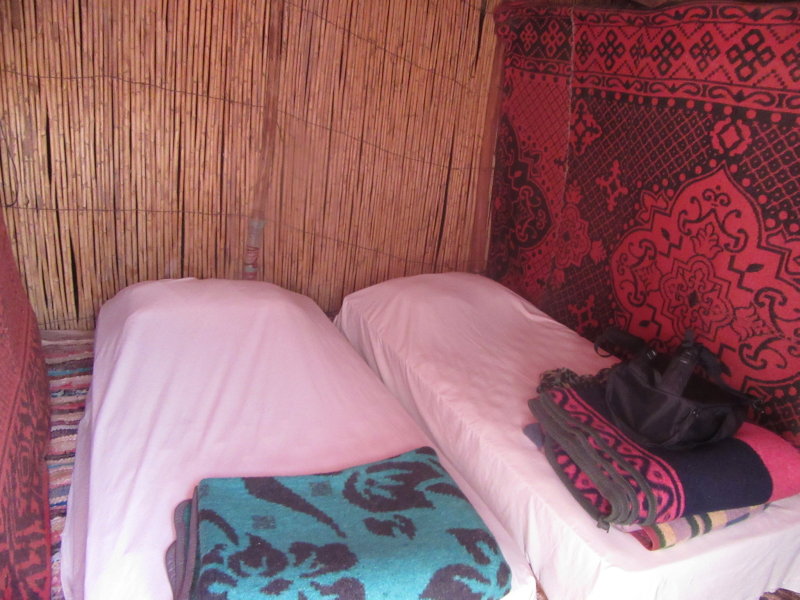 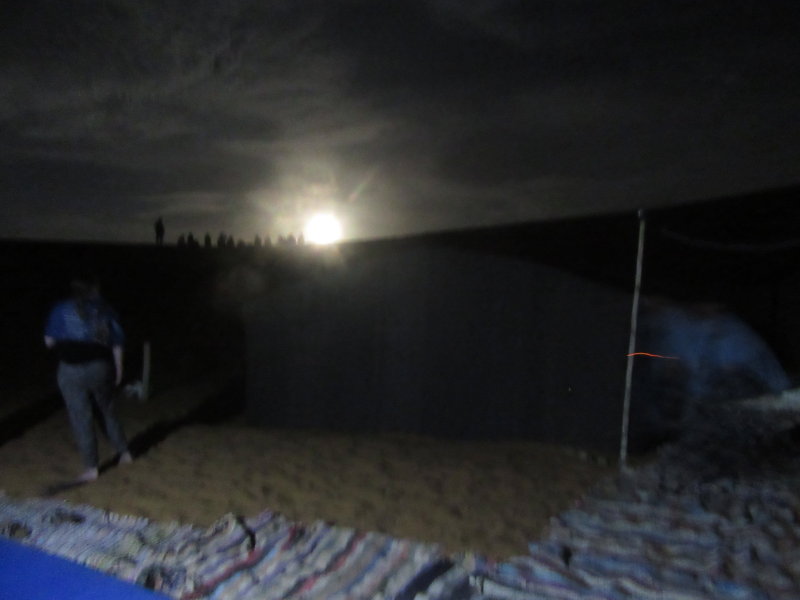