Xochimilco, Mexico
“We travel because we need to because distance and difference are the secret tonics to creativity. When we get home, home is still the same, but something in our minds has changed, and that changes everything.” Jonah Leher
Lake Xochimilco is a system of canals. It was the main transportation for goods from the pre-Hispanic days until the 20th century. Parts of the shallow lakes were filled in creating canals and islands. These islands are called chinampas. They were made as a way to increase agricultural production. Rafts were constructed of juniper branches. Lakebed mud and soil were heaped, and crops were planted. These rafts would eventually sink, and a new one would be built to replace it. Over time, these sunken rafts would become islands.
The canals are 25 km from Mexico City and depending how you travel, could take at least 1 hour.
The start of our trip was relatively easy; that all changed when we got to the trains. These trains leave approximately every 15 minutes. We waited in line. It was wall to wall people. As we were further back, it gave us time to observe how they were going to fit all these people on the trains. Once the doors opened, people starting shoving to get in. We thought we had it figured out, but we were shoved rather hard, and my husband was pushed to the ground, but he was okay. People were laughing as they were shoving. I think it is a national sport! It was so crowded that you didn’t have to hold on to anything. You couldn’t move if you wanted to. 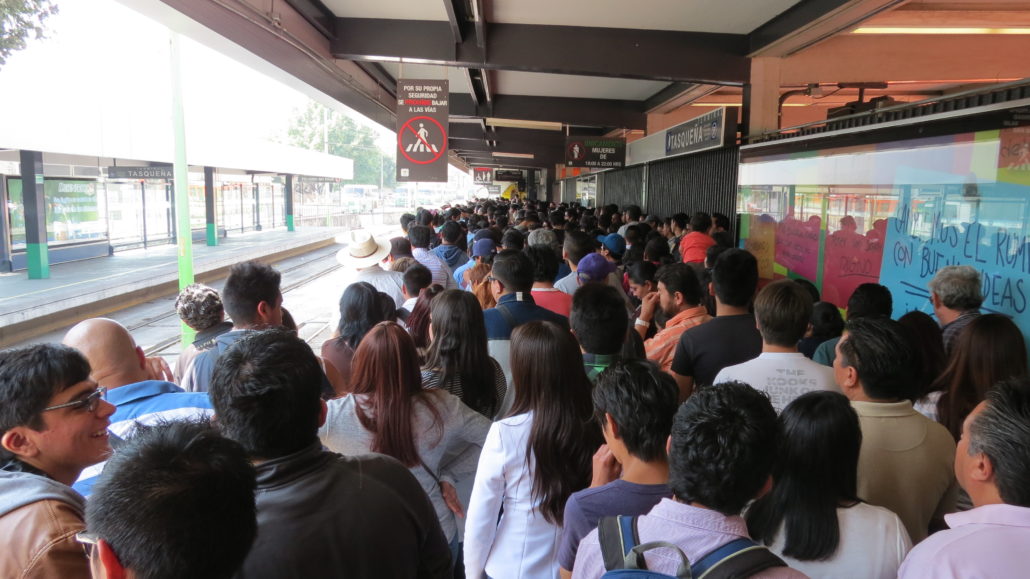 Once we left the train, we started walking, unsure of where we were going.  Along the way, we were “helped” by a few people giving us directions. They had official looking tags. We thought that this was a nice service to help people find the boats. We arrived at what we assumed was our destination. After all, there were boats, a ticket booth, and an eatery place. Then the bartering started. Fortunately, we had done our research and knew that it was 350 pesos per boat, regardless of how many passengers. They started by asking for 350 pesos per person. We bartered but didn’t get the price down much. It was always per person until we decided to leave. THEN they started talking about 350 pesos per boat. By this time, we were a little disappointed and decided to leave. At this point, one man hollered “Go back to where you came from”. We were shocked. It’s not the norm for Mexicans. We have always found them to be very friendly and happy people. We headed out, hoping that this was not the only place to rent boats. 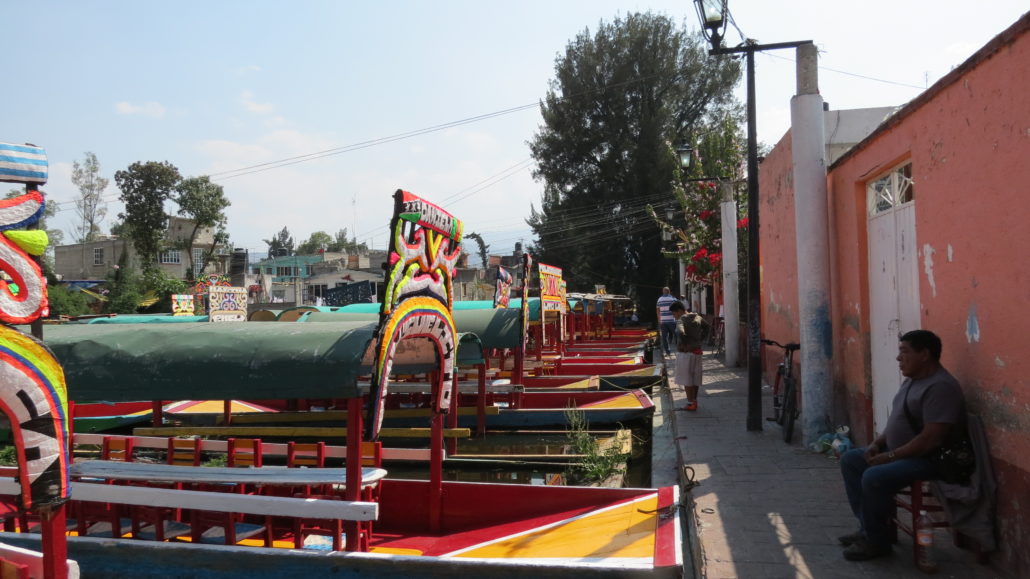 We started walking and talked to a couple of locals who gave us directions to the boats. Totally opposite direction from the previous place. We had to walk some blocks, but once we got there, we knew immediately that this was the right place. There was a huge sign with the price on it so no bartering. We decided to go for two hours and were happy that we did. 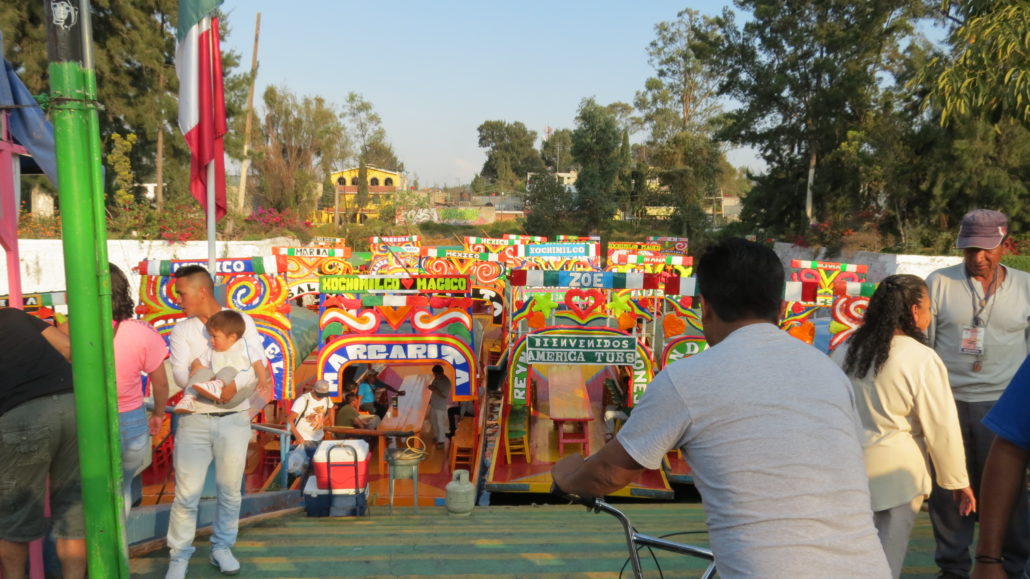 The boats are known as Trajineras. In times past, these boats were mostly used for the transport of goods, but now they are almost exclusively used for tourists. They are similar to gondolas but wider. You can buy food, drinks and souvenirs from the smaller boats.
For lunch, we stopped by a boat where the woman was preparing food. Her husband jumped onto our boat, took our orders and then came back with a tablecloth, cutlery, etc. While eating, we continued our trip along the canal. On our way back, we stopped, and the man took our plates.

It was so much fun watching all the families celebrating. We saw birthday parties, engagement parties and some just having fun on their day off. I would go again. 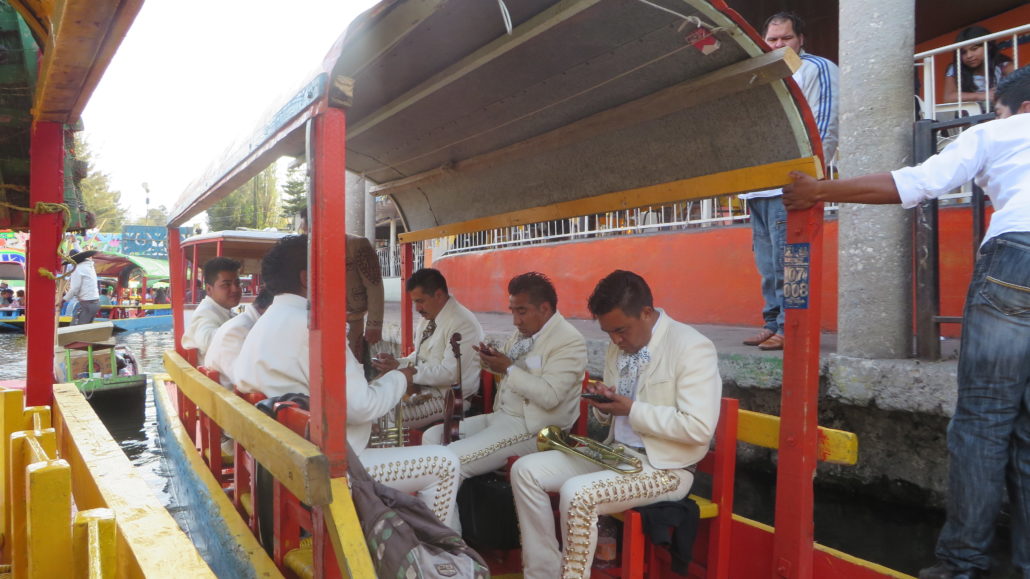