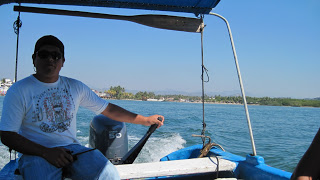 Barra de Navidad and Grand Bay Resort
Barra is the next town over from Melaque.  You can walk to Barra on the beach or take the bus which cost 6 pesos or less than $.60.  Barra is a lovely little town but a bit more upscale than Melaque.  Barra has its own charm but we do prefer the more laid back town of Melaque. 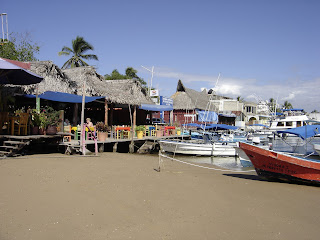 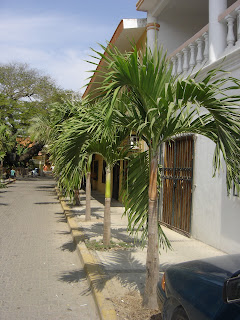 We enjoy walking around Barra and seeing the different stores, restaurants 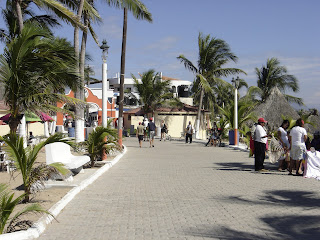 and of course walking along the Malecon.
My husband decided that we should take the water taxi over to the Grand Bay Resort and have lunch as that has been on our “bucket” list for a couple of years now.  The water taxi was 20 pesos each return so we paid a total of 40 pesos or less than 4.00 for the trip for the both of us. 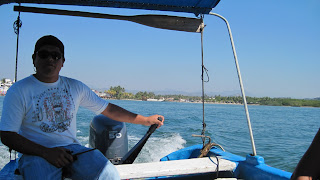 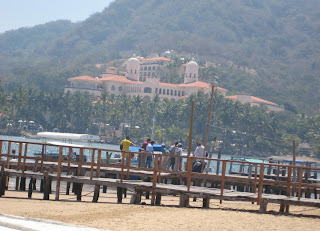 Once there the special treatment started. We were shown the way to the poolside restaurant that we wanted to eat at by a charming young lady who also told us about all the things we could do while at the resort.

Once at the restaurant, we had 4 waiters to see to our every need. The service was impeccable but I found it a little cloying.  We had hamburgers and a drink.  Very pricey. The hamburger was okay but we have had  better hamburgers in a simple little restaurant in Melaque. 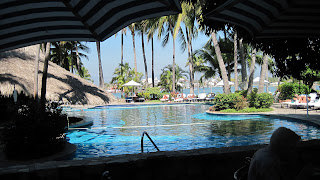 After lunch we walked around the whole complex.  The resort is large and quite unique.  We wondered how they were making money as we did not see that many people around.  Perhaps everyone was golfing or in Barra.  There were a few people around the pool. 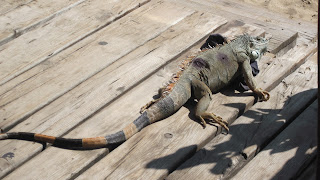 We stopped at a restaurant in Barra to have a drink and this poor little fellow was not having a good day. Apparently he fell out of a tree and a dog bit him.  The owner of the restaurant said he was taking him to the vets to see if anything could be done for him. I doubt that much could be done.
We also like to walk over to the canal although on this trip we didn’t have time.  Expensive vacation homes line the canal but in the other residential areas, the homes are more affordable.  The homes in Barra for some reason cost less than in Melaque.  All in all another good day.
https://www.thetravellinglady.ca/wp-content/uploads/2011/01/IMG_0167.jpg 180 320 TL_Admin https://www.thetravellinglady.ca/wp-content/uploads/2016/11/logo-300x71.png TL_Admin2011-01-30 01:02:002017-10-20 19:18:48Barra de Navidad and Grand Bay Resort
0 replies

Food at your door