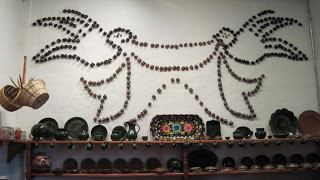 Today we spent wandering around Patzcuaro.  There is so much to see here that we are realizing we will not have enough time to see and do it all.
Patzcuaro has worked to keep its traditional colonial-indigenous look.  Houses in Pátzcuaro are made of adobe and/or wood and generally have tiled roofs. Pátzcuaro is the market hub of the region, with smaller villages bringing in their own specialized crafts such as copperware, black pottery, musical instruments, baskets etc.  Pátzcuaro is a UNESCO Heritage City.  It is also one of Mexico’s “pueblos Mágicos” (Magic Towns).
The town centre is called the Plaza Vasco de Quiroga or the Plaza Grande. The Plaza Grande was dedicated to Vasco de Quiroga in 1964, when a fountain containing a bronze statue of the bishop was placed in the centre. Unlike most other towns and cities in Mexico, the main church does not face the plaza.
One block to the north of the Vasco Plaza is the Plaza Gertrudis Bocanegra, also called the Plaza Chica. We found many vendors selling their crafts and food.  It is a great place to find some local dishes if you do not mind sitting in the middle of the market. One favourite seems to be sweet potatoes. There are vendors selling hot sweet potatoes and if I got the translation correct, they will ask if you want it with cream.  We did not try it but will on the next trip. 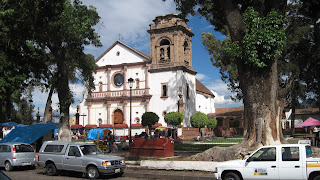 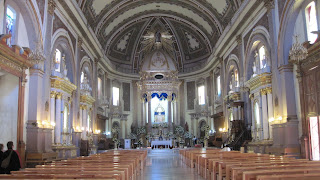 Two blocks east of the Plaza Chica is the Basilica of Nuestra Señora de la Salud (Our Lady of Health) Her image is made with corn-stalk paste and honey and was created in the 16th century. Vasco de Quiroga built this church over a pre-Hispanic ceremonial site to function as the Cathedral of Michoacán. The remains of Vasco de Quiroga are interred here.

The Museo de Artes e Industrias Populares (Museum of Popular Arts and Industries) is located just south of the Basilica. The building was originally constructed as the College of San Nicolás in the 16th by Vasco de Quiroga to prepare young men for the priesthood and to teach Indian youth to read and write. The College was moved to Morelia in 1580, the building was then turned over to the Jesuits to found the College of Santa Catarina, which functioned as a primary school.  It now contains one of the largest collections of lacquered items, models, and other crafts. Looking at the exhibits is like taking a walk back in history. Even the floors hold a surprise: cattle vertebrae are laid in-between the floor tiles at the doorways. These serve as a ‘rug’ to wipe your shoes. In the back yard is a troje (a wooden cabin typical of the region) and the base of what once was a Purépecha ceremonial centre. 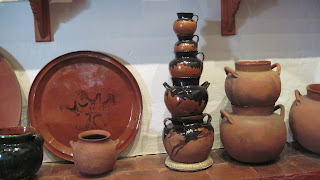 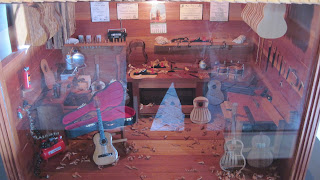 The Casa de los Once Patios (House of Eleven Courtyards) was constructed in 1742 for the Dominican nuns of the order of Santa Catarina de Sena. They gradually expanded the initial building by buying adjacent houses, which is why the complex once had eleven courtyards, but now that is down to only five. In the 1960’s, the complex was restored and since then has functioned as workshops and stores for local crafts. I bought an intricate piece of needlework from a young woman who said she belonged to a sewing group called 60 women. On the wall of her store is a certificate from the college stating that she had completed the course in needlework.  The other stores in the 11 Patios also have equally high quality crafts. 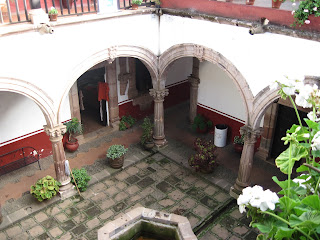 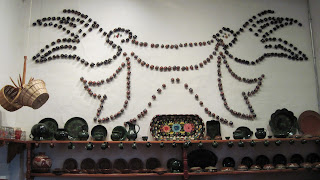