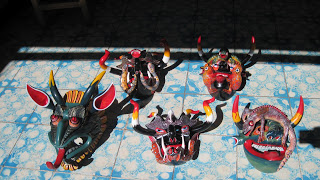 So many pleasant surprises have been happening to us that we eagerly set off on today’s journey. We were not to be disappointed.
The first town was Tocuaro, a small village of 656 inhabitants but home to a few famous mask makers. We met two of them.
Mask making has been a tradition in Mexico for centuries. During pre-Hispanic times, American natives used masks as part of their religious ceremonies. Later, Christian traditions were incorporated into celebrations and today mask are still an important feature of many fiestas. They are worn in ritual dances to represent persons or animals in the telling of a story.
Masks are usually made of wood with embellishments of leather, bone and often-genuine hair and teeth. They may be fashioned from other materials, such as animal shells and tin, and they can be painted, lacquered, or left in a natural state.  Devils and duality masks are among the fascinating representations created. 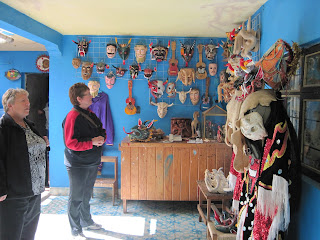 We met Felipe Horta who not only had a wonderful mask collection for sale but also showed us his own private collection of masks from around the world.  We bought a wonderful little mask, little gruesome but not as much as other masks.
Each mask is made from one piece of wood with the exception of the horns and some of the larger teeth. this is done so they can be removed for shipping. 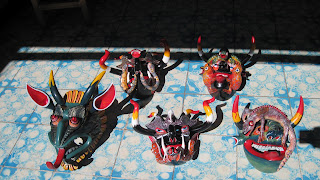 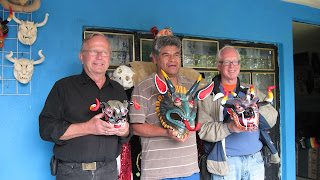 Our next stop was to the home of Modesto and Manuel Castillo, sons of Juan Orta Castillo (1940 – 2006), who was one of the finest traditional mask artists in Mexico. They continue in the family tradition of mask making.  Our friends were thrilled to see some of Juan Castillo’s original masks, although unfortunately the artist had not signed them. 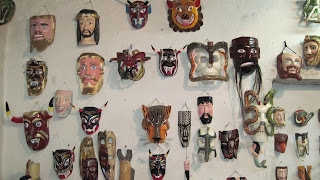 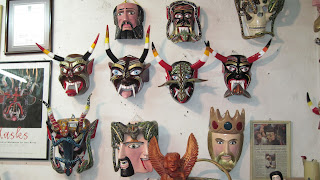 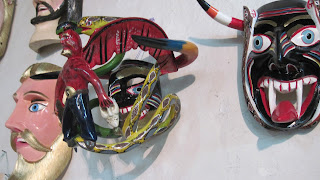 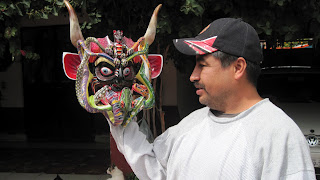 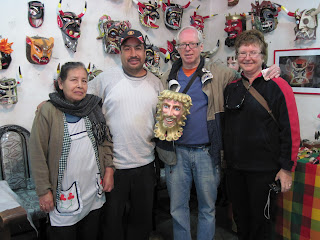 Erongaricuaro was the next town on our tour.  Erongaricuaro means “Place of the Watchtower” or “Place of Waiting”.  In 1440, it functioned as a military port in order to control the west of Lake Patzcuaro.
During the Second World War, a group of French surrealists found refuge in Erongaricuaro. One of those surrealists apparently was Andre Breton who designed, according to legend the white painted wrought iron cross in the courtyard of the monastery.  We wandered around the monastery and inadvertently wandered into the private garden of the priests. One of the priests found us and kindly allowed us into the monastery gardens that overlooked the lake.  We were asked to be very quiet.  Near the back of the garden was a traditional Purépecha troja house. 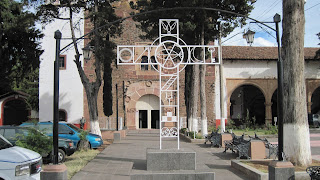 We stopped for lunch at Pizza Testerelli.  The Italian-Argentine grandson of pizza purveyors in Argentina and his wife run this café.  The pizza is delicious and authentic Italian style.
After lunch, we made a brief stop in Jaracuaro. This town is renowned for its straw hats.  We were fortunate to be able to see the whole process in hat making by one of the family’s.  They kindly invited us into their home and workshop.  Both my friend and I bought hats – how could we resist!  After seeing how they are made, I will never look at another straw hat in the same way. 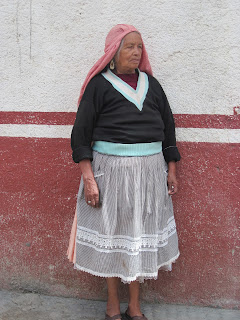 This Purpecha woman had such a beautiful face that we just couldn’t resist asking her if we had her permission to take her picture.  She agreed but was surprised that we thought she looked beautiful.

The machine is heated by propane. The iron hat form is very, very heavy. The men tried to lift it but it was not easy.

The wife made it look quite easy.  She explained to us that if she left it on longer, then it would take on a darker colour. 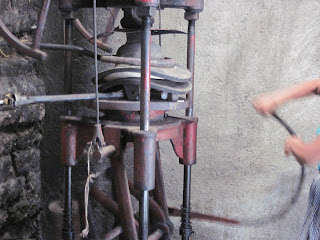 Tzintzuntzan means “Place of Hummingbirds”.  It was the capital of the Tarascan people.  Now, it is known for its archeological site and other historical sites in and around the town along with a weekly market highlighting the town’s crafts.
As we walked along the path to the 16th century Franciscan convent, you could see the olive trees, which were purportedly planted by Don Vasco de Quiroga and considered the oldest olive trees in the Americas.
Also, along each side are stone ‘stations’ that during religious holidays, the faithful will stop at each station with a prayer until they reach the church. There is a church on either side of the convent.  One was built for the indigenous people and the other for the Spaniards. 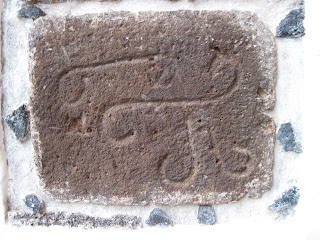 Behind the church is Ceramica Tzintzuntzan, the ceramic studio of Manual Morales, a fifth generation potter. His studio is a converted missionary hospital.  On one of the outside walls, they x-rayed the wall and uncovered original carvings in the stone that were taken from the pyramids. 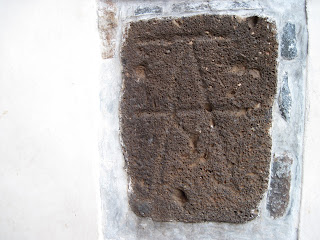 Around Patzcuaro, Mexico
Scroll to top