“In the world through which I travel, I am endlessly creating myself.” Anonymous

You could spend days touring the hill towns of Tuscany. Each one is different. You can either sign up for tours or rent a car and explore on your own. Both options have benefits. We decided to go the tour route. Once again, we went with Viator Tours. The upside is that everything is planned for you. The downside is that you have limited time in each place. For some places, the time allowed was enough but for others, not so.

Monteriggioni was built in the thirteenth century to protect Siena. With its fourteen towers, it is considered to be one of the best-preserved medieval towns in Italy. It was even mentioned in Dante’s Divine Comedy. He wrote:

“As with circling round

Of Turrets, Monteriggioni crowns his walls;

Was turreted with giants, half their length

Uprearing, horrible, whom Jove from Heaven

Yet threatens, when his muttering thunder rolls.”

Piazza Roma is the main square. You can sit in the square and enjoy a glass of wine, food or coffee. We were fortunate that there were few tourists. The square also features the Romanesque and Gothic style Church of Santa Maria Assunta.

The museum has rooms devoted to a specific moment in the history of Monteriggioni.

There was a lot to see in a relatively small town; wine shops, shops of medieval weapons, jewelry and restaurants, and, for a few euros you can walk the top of the walls.

Over two weekends in July, Monteriggioni has a medieval fair. It is a true re-enactment of the middle ages. Visitors have to change their euros for special medieval coins to purchase food and beverages. Local people and professionals dress in costumes playing the roles of farmers, merchants, etc. Ballad-singers, jugglers, and medieval food is all part of the festivities. This fair is considered one of the most famous medieval pageants in Italy. 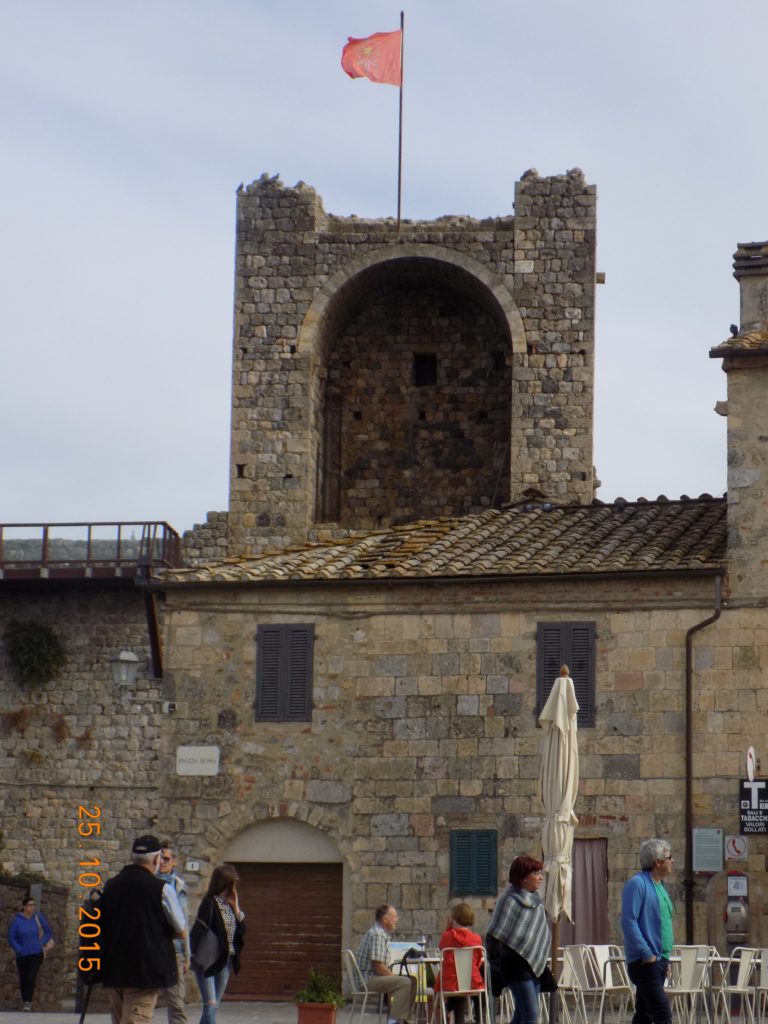 Spending a day in Siena is inspiring. There are many shops and restaurants to tempt you with their wares. Literally, every third door opens up to a restaurant, enoteca (wine bar or shop) or deli.

II Campo is the central piazza, a great place to eat, sip some wine and people watch my favorite pastime. People were using the square like a beach with blankets, food, and beverages.

II Campo is famous for the Palio di Siena, a horse race that occurs twice a year, July 2nd and August 16th. According to Wikipedia, the center of the square is filled with thousands of people. The “racetrack” around the center is filled with sand. There are ten horses and riders, bareback and dressed in their city contrades’ (wards) colors. There are seventeen contrades, but not all seventeen are represented. The seven contrades that did not participate in the previous race are automatically included. Three more are chosen by draw. Horses are of mixed breed; no purebred horses are allowed.

The race runs for three laps, and the riders are allowed to use their whips not only for their horses but also to disturb the other horses and riders. The race, in fact, is won by the horse, not by the riders. The winner is the first horse to cross the finish line with or without its rider.

It would be worthwhile to plan a trip to Siena to watch this spectacle. You will have to book early to get a seat of any sort as they sell out rapidly. 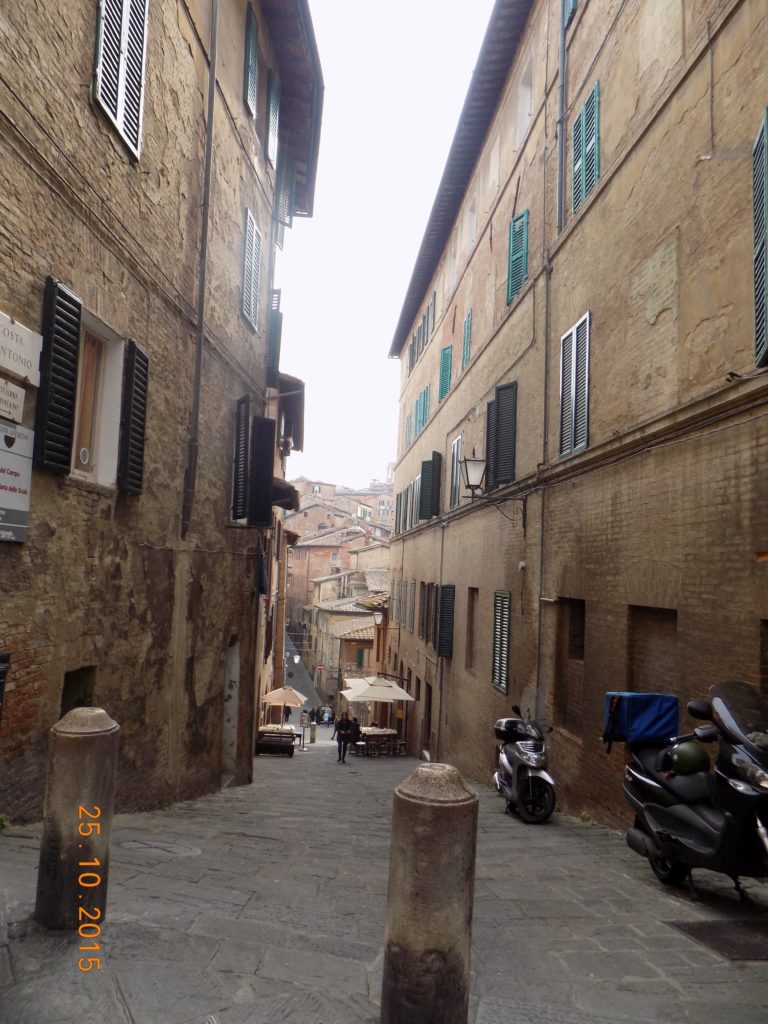 San Gimignano is located about halfway between Florence and Siena. It is not difficult to spot San Gimignano as you traverse the rolling hills of Tuscany. The fourteen towers rise above the small walled medieval hill town. It is often called the “city of the beautiful towers.”

The story of the towers dates back to the 12th century. For two centuries, there were conflicts between two families, the Guelphs and the Ghibellines and other family rivalries within San Gimignano. The competing families would build tower houses of increasingly higher heights. Some were built as a refuge against attackers, others were empty, built only to boost egos. Near the end of the medieval period, there was a total of 72 tower houses. The local council finally ordered that no tower was to be taller than that adjacent to the Palazzo Comunale. While most of the towers were destroyed by wars, catastrophes or by order of Florence, San Gimignano has managed to conserve fourteen towers.

San Gimignano is not only known for its towers but for saffron, and its white wine, Vernaccia di San Gimignano.

In the main square of the town is the Piazza della Cisterna, which is named for the cistern or well. This served as the town’s main source of water for many years. It is a great gathering or meeting place for locals and tourists. Surrounding the well are shops and restaurants within the old facades. 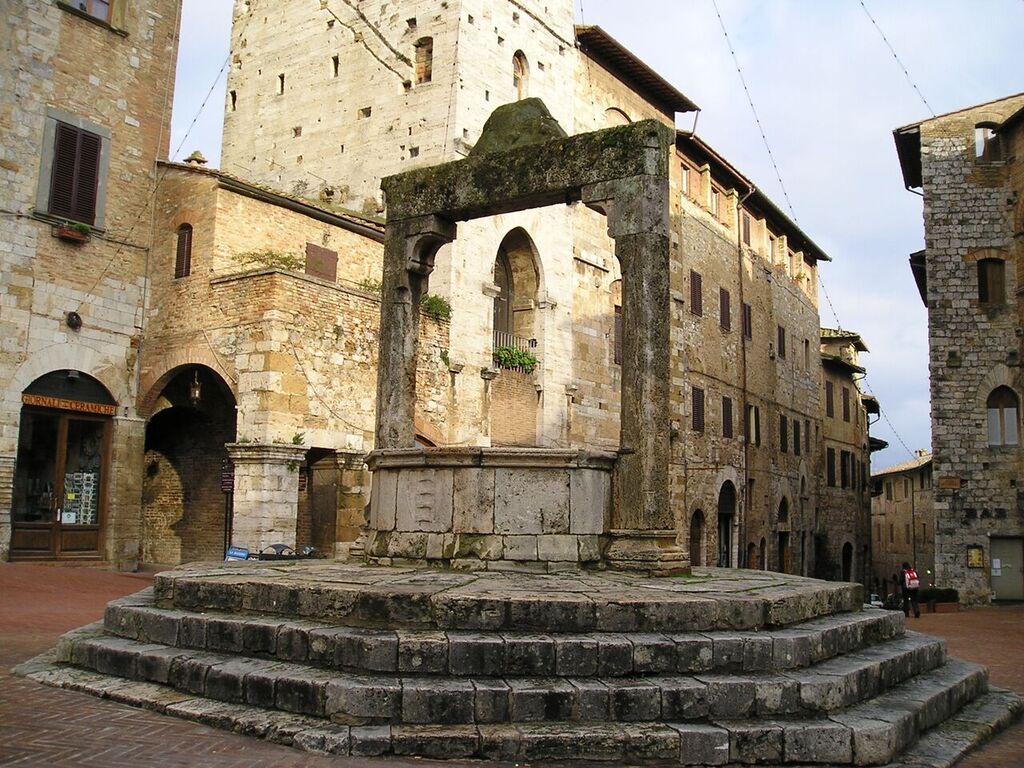 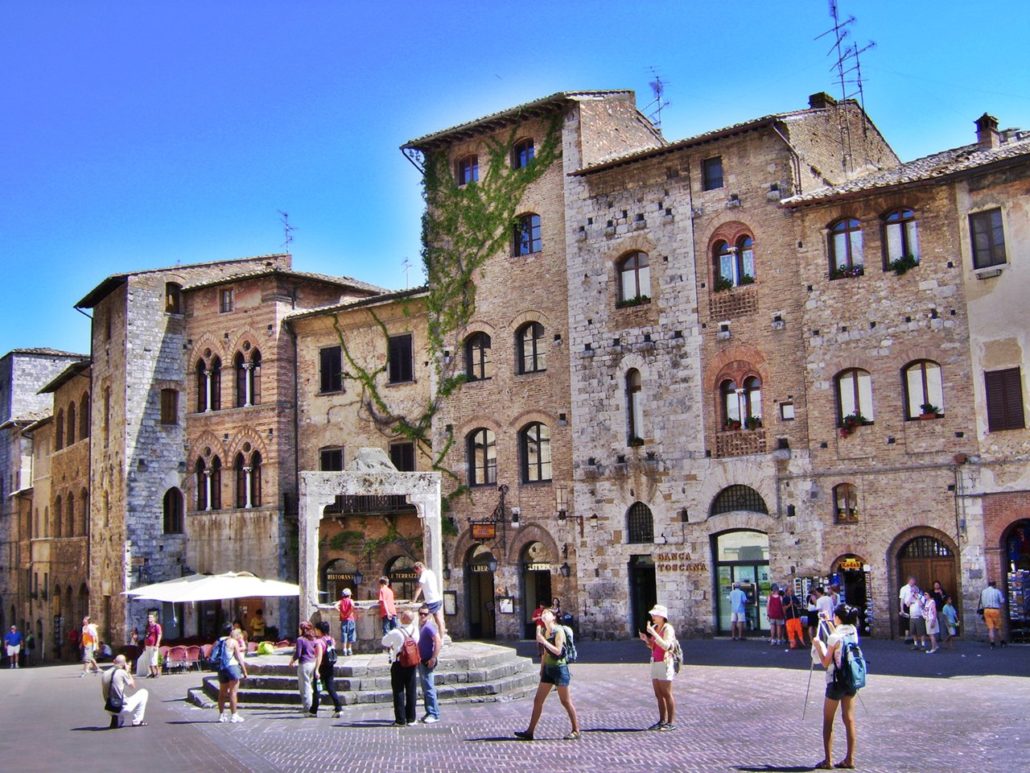 Part of the tour included lunch at a local winery. We had the privilege of sampling a 15-day old olive oil. I was under the belief that it had to be aged. Wrong! It was a pleasant and enjoyable taste.

Of course, we also sampled a few wines. 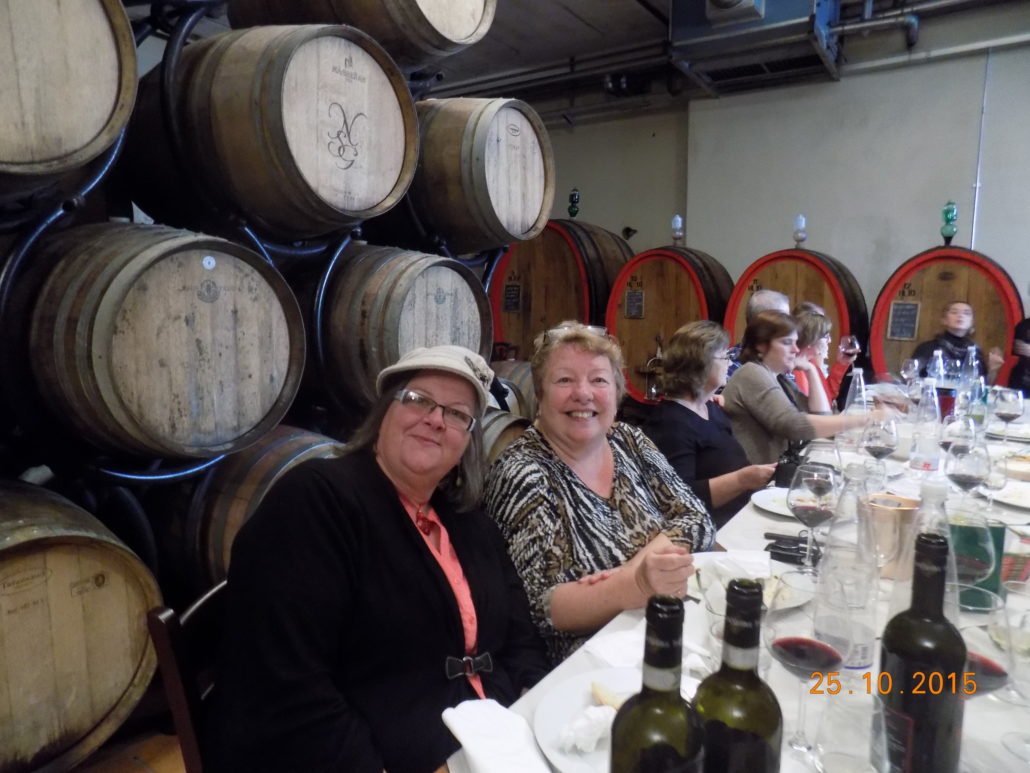 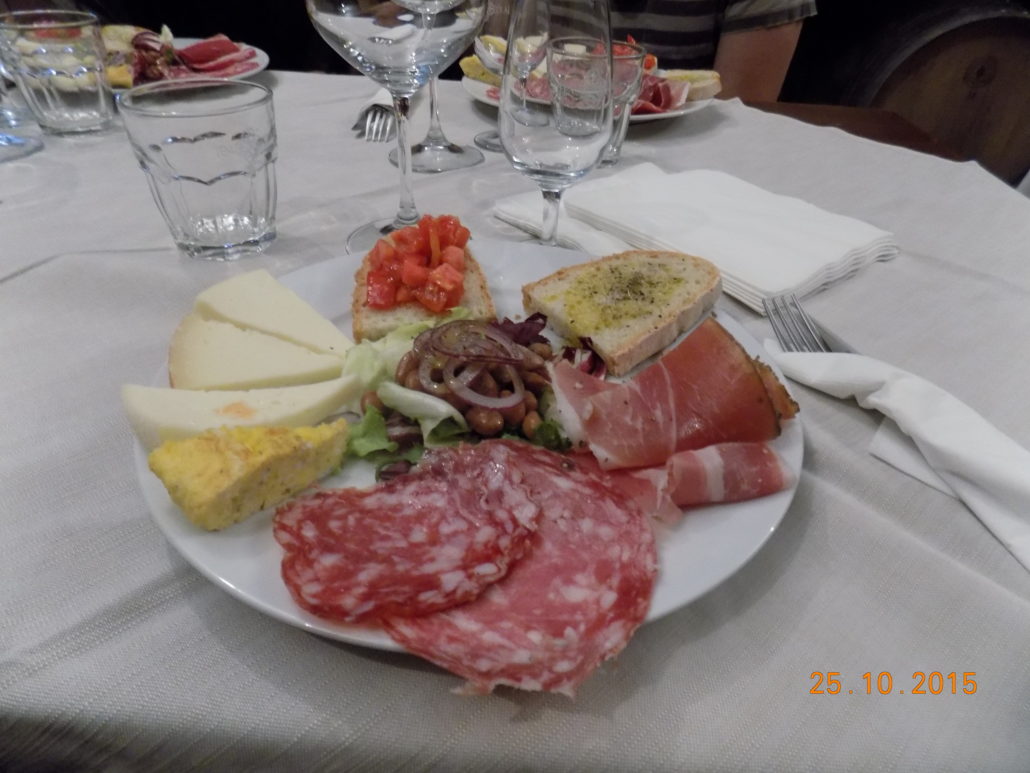 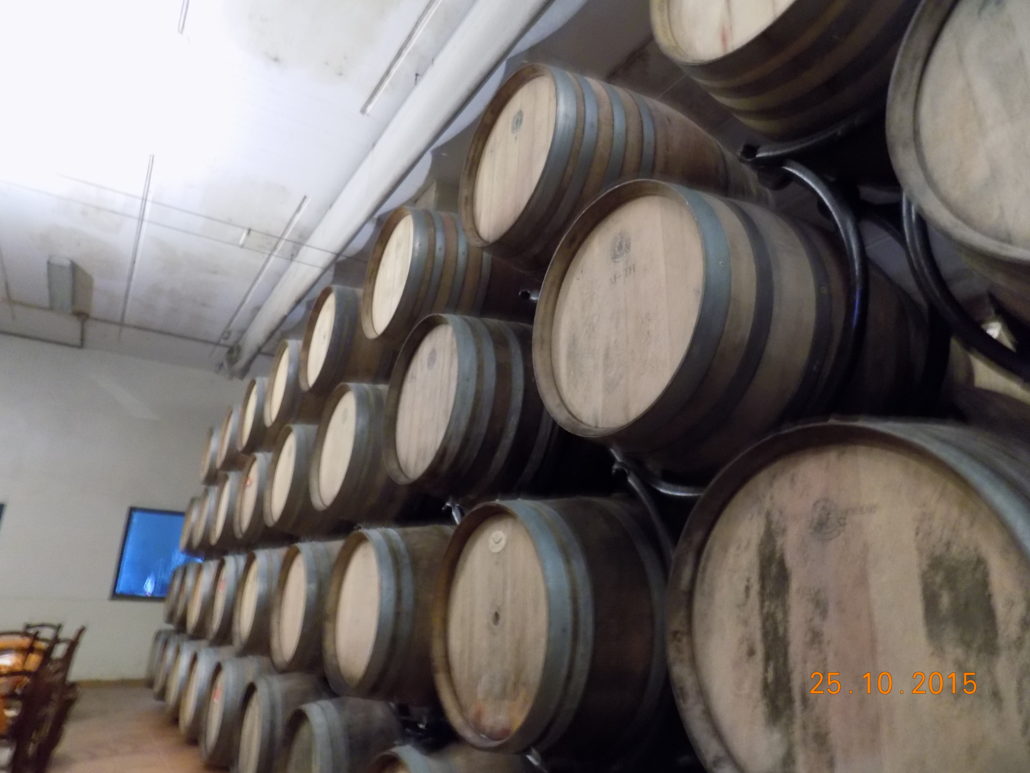