“In the end, we only regret the chances we didn’t take.”

Jocotepec, Mexico, is on the west side of Lake Chapala. It is a small, seemingly unassuming traditional town, but what isn’t apparent at first is that just outside this town are miles and miles of greenhouses or coverings for berries. Blueberries, strawberries, and raspberries are mainly for export to the U.S. or Canada. These greenhouses provide work for many people, and many of the workers live in Jocotepec. What I found strange was that I didn’t see many berries sold in the town’s grocery stores. Maybe I didn’t look hard enough. I did not realize that Driscoll Company started the berry “farms.” The following is a quote from Driscoll’s berries. They provided all the infrastructure for the berry growing.

“Our business is run differently from others. We don’t grow our own berries. Our Joy Makers develop proprietary varieties, and our nurseries cultivate the plants. We then hand those off to independent farmers that range in size to do what they do best. Once sold, 85% of the revenue goes back to the farmers.

Over 22 years ago, Driscoll’s set up small plots in Jocotepec and worked with the local farmers to farm berries. “

The town itself is walkable and is a typical traditional Mexican town. The main square has the usual restaurants and stores surrounding it. There is an excellent café with baked goods where the locals gather. 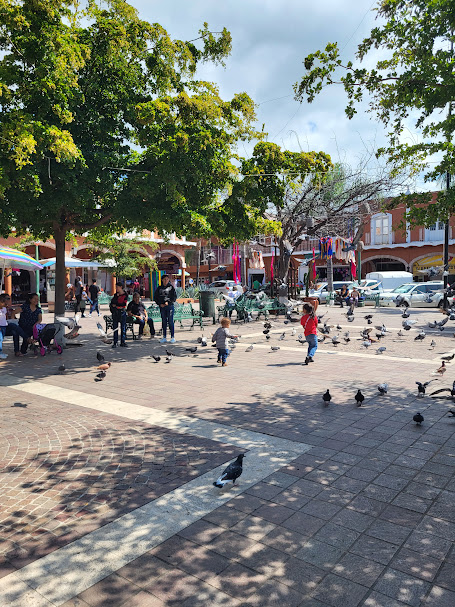 We stayed at a lovely Airbnb, Carmen’s Place. She and her family were wonderful hosts, and the accommodations were clean, comfortable and a perfect location to the square and other points of interest. We would definitely stay there again.

Another great find was Panaderia Artesanal Bakery, Coffee Shop Bistro! The owner Joe Campos was very proud of his work. So much so that I thought it was just newly opened, but he has been in business for five years. My husband had a giant burger, and I had a sandwich, which kind I forgot, but I never forgot that I loved it. I haven’t felt that way about a sandwich since my favourite sandwich at Earl’s Restaurant. It was so good. If I lived there, it would be my go-to for bread, desserts, sandwiches, and excellent coffee! You can find him on Calle Juarez 29. His phone number is 33 3011 4123. His website is on Facebook on Panaderia Artesanal.

The Malecon in Jocotepec is beautiful. We decided to walk, thinking that it was not that far. A neighbour across the street from our Airbnb said she would not walk there, but we thought, hey, we walk a lot; how far can it be? Our landlady also showed us the “Uber” place up the street where you can get an Uber. Strange, we thought. I assumed that you had to call Uber. Anyway, we decided to walk to the Malecon. Well, we walked and walked. Several km later, we finally came to the Malecon. We rested and then continued our tour of the area. Along one side of the walkway, there were several huts. They sold drinks, food and souvenirs and wine. The wine hut caught my eye, and we decided to try it out.  The wine is made from local berries and is excellent. We talked to the owner and asked him about his company.

He told us that the company started a few years ago when one of his sons was 16. The teacher wanted the class to make something saleable from ingredients or materials from the area. He made marmalade from berries which went over quite well. He then asked the teacher if he could make wine. She researched and said that was doable. So that was the beginning of the winery. From their website:

“2014 Andres Gonzalez, a 16-year-old boy, saw an opportunity to present a school project in high school based on the use of berries grown in Jocotepec, transforming them into an artisanal wine.

2015 it was presented for the first time in Ensenada, Baja California at the XXII Congress of Science and Technology of the Sea in the land of wine, considered the cradle of wine in Mexico, having great acceptance by the public. There he began his participation in school competitions, highlighting the “Expolitec” innovation contest by the Polytechnic, University of Guadalajara, where he won first place.

2016 He participated as a representative of the company “Lago Rojo” in the state-owned National Network for Sustainable Development (agribusiness contest), where he won second place and, with it, the opportunity to participate in the same contest but National. “

They are a small company and sell to local shops or specialty stores further out of town. They will also ship anywhere in Mexico.

We bought lunch at one of the huts that only make burgers. They were excellent!

After lunch and some wine, we decided to head back to our Airbnb, so I pulled up my Uber app and requested an Uber. We waited and waited until, finally, Uber said they couldn’t find any drivers. Boy, they must be busy, I thought. We tried to get someone to call a cab for us, but no luck. So, we walked and rested and walked. We later discovered that the “Uber” stand is not linked to the real Uber that I am aware of. You just go to the spot and tell one of the cars that you want an Uber. Basically, it is just a taxi stand. Maybe the rates are lower, but I don’t know.

One day we took the bus to Chapala, further down the lake and spent some time walking around the Malecon. The traffic was heavy, and it took us an hour to get there. A pretty place that we will have to explore more of one day.

All in all, Jocotepec is a pleasant small town where life is at a slow pace. We need that sometimes.

Some general photos around Jocotepec.