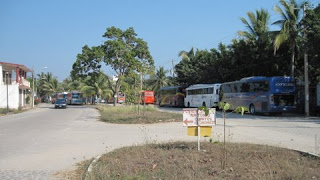 Two weeks ago, you could roll a bowling ball down the middle of the main street and not hit anyone.  The beach was virtually empty except for the few Mexicans and even fewer “gringos.” 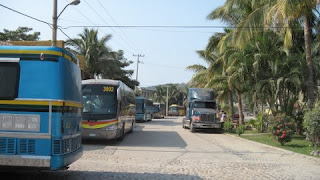 This week, the Mexican tourists have arrived by the busload for their winter holidays. The restaurants, stores, streets, and beaches are full.  Buses line the streets of Melaque. The drivers sleep down below along with having their office there as well. 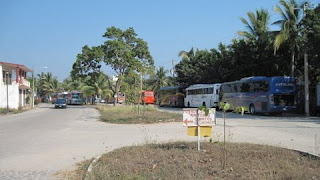 Mexican tourists rented two bungalows in our complex.   In those two units, there were nine people.  There is only one queen size bed in each unit.  Those people left the next day and another family of 11 came.  I think they are only renting the one unit but we noticed in the morning that two people were sleeping in the hammocks on the roof, under the palapa.  It is amazing how different our cultures are and yet how similar in some aspects. 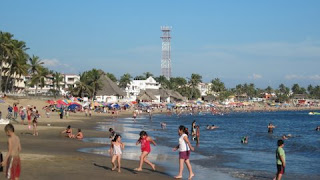 This influx of people is good for the local merchants after hurricane Jova on October 12th, 2011, devastated the area.  Water and mud rose as high as 4 feet and higher in some areas. Some people lost all their belongings.  Our landlords had just put in a pool and it filled with mud and water.  The lower bungalows filled to about 3 feet with mud and water.  They were scrambling trying to save as much as they could in the bungalows plus look after their own homes.  As one of the daughters put it, “it was ugly.”  By the time we arrived, you would never know that the town had suffered through a hurricane.  Pictures sent to us during and after the storm showed everyone cleaning up, all with smiles on their faces.  When asked how they were doing they replied that all was well, no one had died in Melaque so they were thankful.  No drama here.  The army was on standby and once the storm had subsided, began clearing the mud and debris from the roads and bridges and rebuilding them as necessary.  The electric power company sent approximately 20 trucks before the storm hit and the men slept in their trucks so that they would be here immediately after the storm to restore power.  FEMA could learn a thing or two. 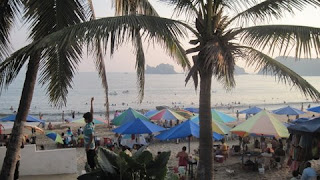 For New Year’s Eve, we spent a wonderful evening with friends at a local restaurant. The food was wonderful, and the entertainer had a beautiful voice. His ten-year-old son also sang a few songs to the delight of the crowd.  The dinner, entertainment, three drinks cost less than $50.00 cdn for two.
You can purchase fireworks from any merchant here.  There are not any restrictions like in Canada and I wonder why no one seems to get hurt.  The fireworks start before Christmas and with any luck will end soon.
After the New Year celebrations are over, everything will settle down, the Mexican tourists will head home and then the influx of gringos begin.