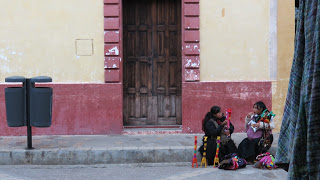 I love being able to see other cultures. This trip, so far, has been a very thought provoking, eye-opening experience.

We hired a guide to take us to two villages just outside San Cristobal. The first place was Chamula, home of some of the Tzotzil. The Tzotzil are indigenous Maya people. The Tzotzil means bat people or place of bats.

Wikipedia excerpt:
“The Tzotzil conceive the World as a square, at whose center is the “navel,” a mound of earth located in the ceremonial center. The world rests on the shoulders of Vashak, analogous to the Four-Corner Gods or Sky-Bearers of the ancient Maya. This cosmic model is reflected in the ceremonial circuits around houses and fields performed by priests, who proceed counter clockwise around the four corners and end in the center, where offerings are made to the gods. The Tzotzil underworld is inhabited by a race of dwarfs, created by the gods during their attempts to create mankind.

The sun is “Our Father Heat,” and the Moon is “Our Holy Mother.” The planet Venus is called “Sweeper of the Path” as it precedes the Sun in his path around the world. Local hills and mountains are the homes of the ancestral couples, the Totilme’il or “Fathers-Mothers,” the most important gods. The next most important deity is the Earth Lord. In modern times, he is pictured as a large fat and rich Ladino living underground, who owns all land and its natural resources. A Tzotzil who uses any of those resources – water holes, trees, mud for his home, and limestone for lime – is expected to compensate the Earth Lord with appropriate offerings in a ceremony.

The Tzotzil believe that each human being has two souls, a ch’ulel and a chanul. The ch’ulel is an inner, personal soul, located in the heart and blood, placed in the unborn embryo by the ancestral gods. It is composed of thirteen parts, and a person who loses one or more of these parts must have a curing ceremony performed by a shaman to recover them. “Soul loss” may be caused by fright of falling down or seeing a demon on a dark night; as a punishment by the ancestral gods for misbehaviour; or by sold into slavery to the Earth Lord, through evil witchcraft.

At death, the inner soul leaves the body and goes to Katibak, the world of the dead in the center of the earth. There it will remain for the same length of time it had been in the human world, reliving his life in reverse, younger and younger, until it is assigned by the ancestral gods to another newborn of the opposite sex. Baptized infants and women who die in childbirth go directly to Winajel, located in the Sun. people who have drowned, have been murdered, or struck by lightning do not go to Katibak. Animals and trees too have ch’ulel soul, which goes through the same cycle.

The other soul, the Wayjel, is an animal-spirit companion, shared with a chanul, a wild animal. Throughout each person’s life, whatever happens to the animal spirit also happens to the person and vice versa. These animal-spirit companions, consisting of jaguars, ocelots, coyotes, and smaller animals such as squirrels and opossums, are kept by the ancestral gods in the four corrals inside the “Senior Large Mountain” in the east side of the world. If the animal spirit is let off its corral by the ancestral gods, the person is in mortal danger and must undergo a lengthy ceremony to round up the chanul and return it to its corral. Only human beings have a wayhel soul.

In the centuries since the Conquest, under the influence of Catholicism, the Tzotzil have come to associate the Sun with God the Father or Jesus Christ and the Moon with the Virgin Mary.” 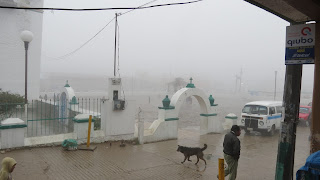 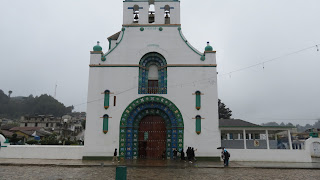 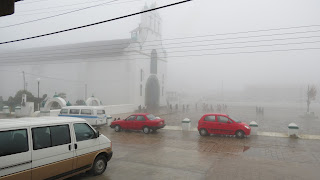 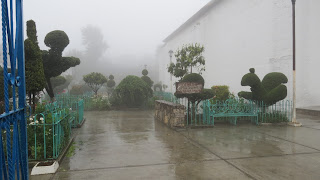 The day we chose to visit the villages was cold and wet but we were anxious to see these villages. Our first stop was at the church, which had been co-opted by the village, and had the Catholic priest expelled in the early 1960’s. The priest is only allowed into the church to baptize children. It was unfortunate that we could not take pictures but the people believe that the photos steal their spirits. What struck me as I walked into the church was the lack of pews, pine needles all over the tiled floor and hundreds of lit candles on the floor and in groups. Each group belonging to a family. The candles were meant to represent tortillas being fed to the saints. There were four other colors of candles, meant to represent the four colors of the corn. Colors were chosen depending on what you wanted or needed; one color represented family while another represented prosperity. Another candle made of animal fat was for an offering to the underworld. There were candles and fresh flowers on the tables as well. In the middle of the room was an altar with flowers and a few crosses. Our guide explained that the crosses were the headstones of graves. There would be a ceremony and a walk to the cemetery to replace the worn crosses with these new and blessed crosses.

As we walked around the church, we noticed a family sitting on the floor, their candles lit, and bottles of soda pop, which are used to induce belching to expel evil spirits. The mother was holding a live chicken that she was passing over and around her daughter. She then killed the chicken by what appeared to be her pulling and twisting its neck. The belief was that the chicken would absorb whatever was ailing the daughter and then killed in order to prevent the ailment going back to the child.

We walked around the village, which at first glance appeared to be a bit more modern than I had envisioned but due to the cold weather, we did not venture further than the village center.

One thing I did notice was the size of the jail. There were cells that were exposed to the outside so that everyone could see who was in jail as part of the punishment. The local police officers wore white wool tunics, sandals, and white shirt and carried a very large stick with a length of leather strap tied at each end to help carry the stick over the shoulder. The justice system in Chamula is very simple. One to three days in jail and exposure to public scrutiny for first offenses. Second offenses could result in up to one year of community service. One of the options for community service is to serve one year as a police officer.

One problem the villages have is alcoholism. Our guide explained that part of the religious ceremony is to drink a local moonshine beverage called posh. This left some of the women as sole wage earners. If the woman decided to leave her husband, she would have to leave the village and her support system of family and friends. The day we visited there was a man passed out on the bench outside the church. Our guide made sure that someone would come and take care of him before we left. 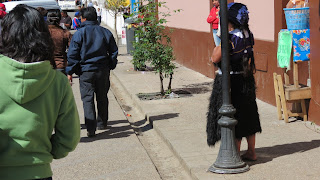 The next village we visited was Zinacantan which was smaller and quieter. The traditional dress was also very different from Chamula. We were taken to a co-op run by a few families. Inside we went into a room that was a typical Zinacantan kitchen. We enjoyed the freshly made tortillas and local coffee. It was a welcome respite from the cold. Their diet is mainly vegetarian, almost vegan, and allows for a life span that is often in excess of modern countries. 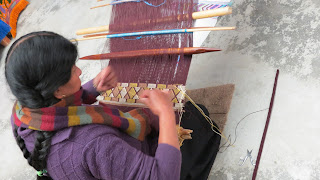 The following video is from our visit to the Zinacantan kitchen.  Notice the fire but no chimney, nothing for the smoke to escape.