“Move. As far as you can, as much as you can. Across the ocean, or simply across the river. Walk on someone else’s shores or at least eat their food. Open your mind, get off the couch. Move.”   Anthony Bourdain

When I asked Justine Crawford if I could interview her and her husband Mark about Cassiar Cannery for my blog, she not only agreed but suggested that I spend a night to get a better feel for the place. Who was I to say no to such a generous offer? *

Everyone has a story. Mark and Justine certainly have an intriguing one. In 2006, they were living in Vancouver but wanted to get out of the hectic lifestyle of the city, and after having problems with a neighbour complaining about their dog and threatening to have the dog put down, it was the push they needed to leave. Justine researched acreage, and so they headed to Northern British Columbia looking for a place to live and work. After a bit of searching, Justine saw an ad for the Cassiar Cannery. She saw the houses and was intrigued but had to convince the realtor to show them the property as the realtor was very hesitant to do so. It had been abandoned by the previous owners and was in such bad shape that no one was interested in buying it until Justine and Mark came along. After seeing the before pictures and experiencing what they have accomplished, I am amazed that they had the vision and energy to tackle this daunting task. Just clearing all the garbage, junk, wood, and steel was no mean feat. As Mark said, “It wasn’t just a few bags of garbage.” It took them ten months just to clean up the dock. Mark is an excellent shipwright, and after a few rough starts, which included fixing a 90 ft. float home for the previous caretaker that wouldn’t leave because his home wasn’t ready and a too low bid on another job, they were able to rely on his experience as a shipwright for living expenses.

In the beginning, they started sleeping in what is now their home, but they had to shower in the blue house – 4 houses away and cook in the house next door. They have finished their home and live comfortably with their 4-year-old son, Nicolas and two dogs. 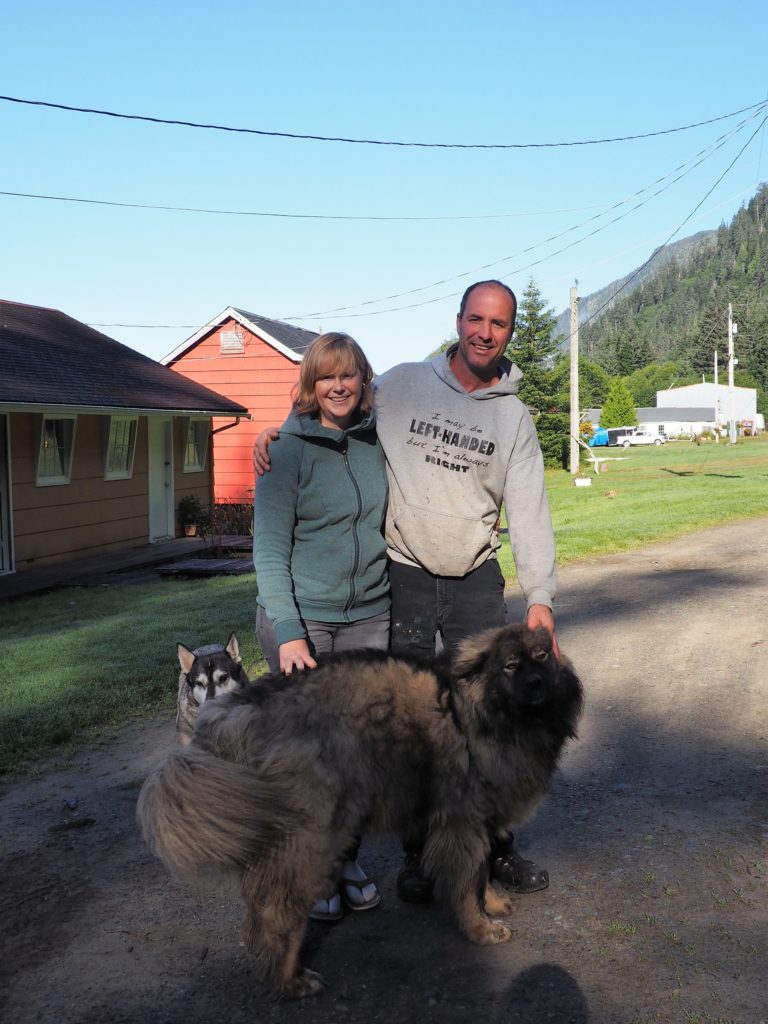 Today, they have four guest houses with a fifth being renovated. The guest houses are clean, comfortable and well stocked. The Coho House is a self-contained one bedroom with a queen size bed. The Steelhead House has one private bedroom and a second with four deluxe twin bunk beds. The Sockeye House has three bedrooms with a private water view queen, the second bedroom has two twin beds and the third a queen size bed and the Halibut House has three bedrooms, one queen bed with a water view, another queen bed, and the third have one set of deluxe twin XL bunk beds. You will need to bring food, but they offer, for a fee, the services of a local chef if you don’t want to cook. 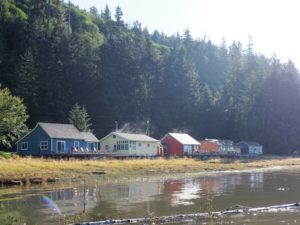 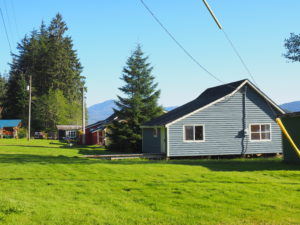 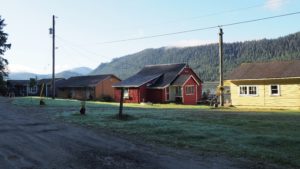 They have a “community” centre where you can do yoga, have family dinners, do crafts or whatever else you need a large space for.

All the wood used to renovate comes from the reclaimed wood that Mark finds in the ocean. He goes out on his boat searching for logs and brings them into shore.With the wood and his sawmill, he makes all the furniture and wood floors in his large on-site shop.  He has made beautiful furniture and will custom make pieces on request.  Justine hates cutting down trees so reclaiming wood this way is more like a sport.

Another good find for the workshop.

Another log waiting to become a beautiful piece of furniture.

Women’s Rejuvenation Retreats where you can experience yoga and meditation sessions, a big canoe experience, learn special textile arts and pamper yourself with massages and other treatments. Some dates are timed to the Via Rail schedule.

Ecology Week: 9 days of adventure and exploration on BC’s  beautiful North Coast. Nestled in the estuary of the Skeena, the Cassiar Cannery is a place rich in natural biodiversity and cultural history. Estuaries, where freshwater meets the ocean, creates a rare and special ecosystem. A hotbed of activity in both the marine and terrestrial habitats that line its shores.

It also includes a trip to the Khutzeymateen Grizzly Bear Sanctuary.

Murder Mysteries: Perfect for a special night out or a relaxing, all-inclusive weekend, this is a stimulating and fun way to incorporate a little drama and super sleuthing into your life.

One of their future goals is to build a proper field station with a lab to attract more researchers. This area is very rich and bountiful with lots of different marine species, but at this point, not a lot is known about it. Dr. Darwyn Coxson, a renowned University of B.C. professor, has been studying the salt marsh between the treeline and mudflats, and he has found 140 species. Travis, who does the mudflats would have been excited about finding eight species of invertebrates, but so far he has found 40. It is a clean ecosystem. It has managed to recover totally from any previous cannery activity.

There are so many things to experience at Cassiar Cannery. Another popular tour is the jet boat tour. The tour is an all-day tour with either Rob or Fred for $1,000 to $1,200 for the boat. Justine said she likes to work with them because they are insured and just good solid operators who will take care of her guests. Who, if they got stuck somewhere, could use their tweezers and a piece of wire and make you a house! They are that kind of people.

Justine said that up to 2012, she felt like an island trying to market the cannery. Now Destination B.C. and Northern B.C. Tourism have approved Cassiar Cannery as a destination and for accommodations. 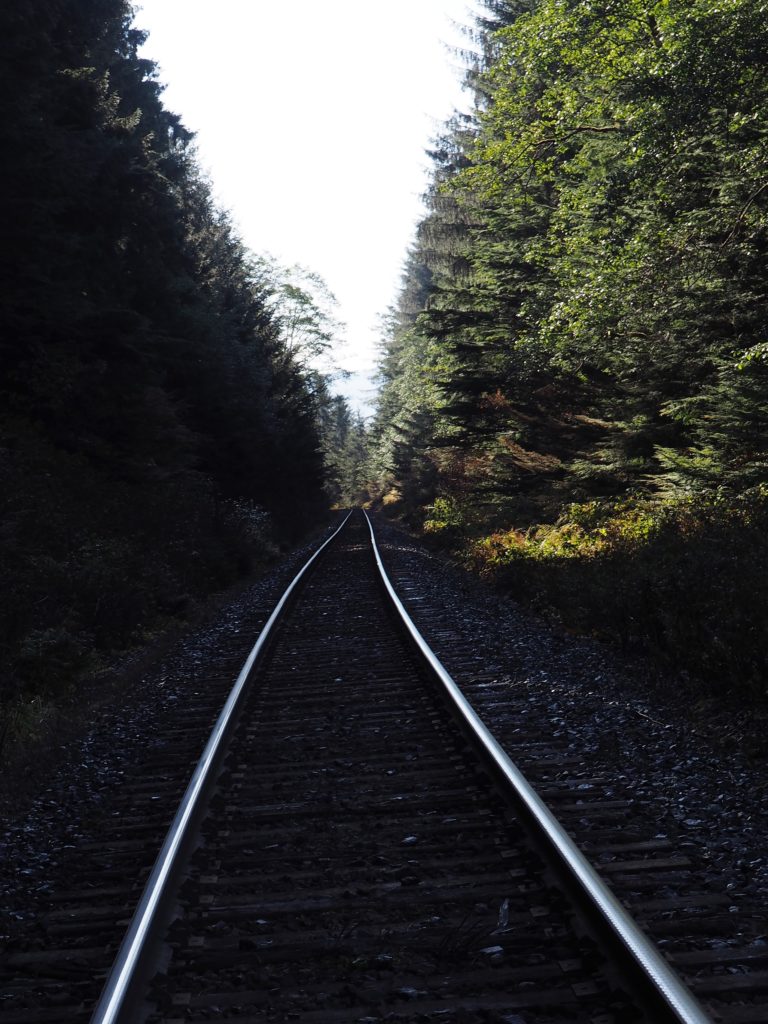 Thank you Mark and Justine for an incredible experience.

*This offer in no way affected my review.