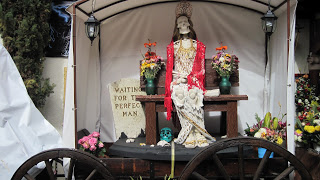 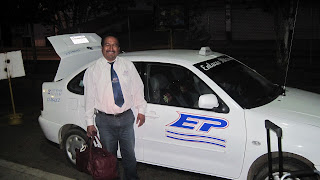 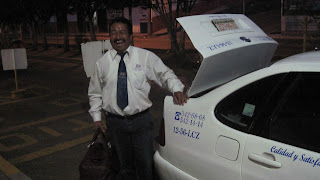 We started heading towards Capula when Homar wanted to know if we would be interested in seeing something very different.  He said he did not believe in this place but thought we might find it interesting.  He was right.  The place is Casa de la Santa Muerte. 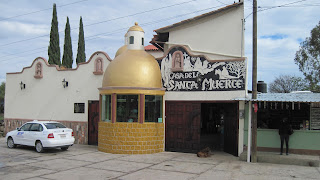 According to Wikipedia: ‘Santa Muerte or Holy Death is a cult figure in Mexico, which receives petitions for love, affection, luck, money, and protection, as well as malicious requests for harm to others by their faithful. However, several churches such as Catholic, Baptist, Presbyterian, Methodist, among others, reject and condemn their worship, considering it diabolical.
At times, this cult is linked to different types of crime such as drug trafficking, muggers and people from different social strata engaged in informal trade such as street vendors. However, it is a mistake to think that the cult of Santa Muerte is only practiced by individuals or criminal groups, as the cult of death, comes from the pre-Hispanic period.
We found the place eerily fascinating.  The whole place was dedicated to people who had died. There were shrines everywhere with offerings.  The figurines were decorated with items that the deceased wore such as dresses, baseball caps and any other items that I suspect were favourites of the deceased.   If there were time to research before we saw the place, we probably would have viewed the whole thing a little differently, noting perhaps what items were placed around each ‘shrine.’ 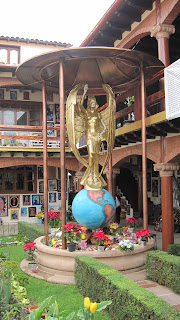 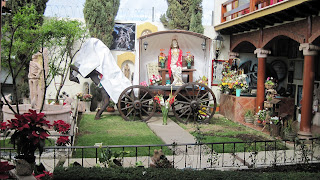 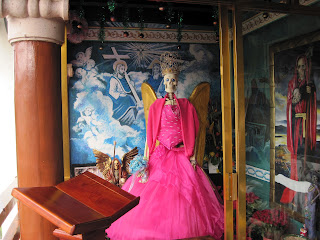 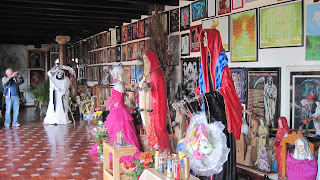 Our next stop was a little town called Capula.  This town is known for its Catrina’s and is home to the famous Mexican artist Juan Torres.  In 1982 sculptor and painter, Juan Torres reproduced La Catrina in clay for the first time. People from Capula soon learned from the painter, and so they created a folk art style that has been imitated in many other pottery centers in the country. 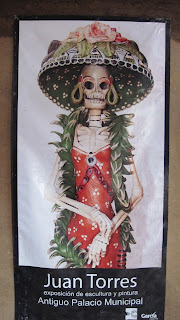 According to Peggy Stein, of Mexico, La Catrina was one of many images created by Mexican engraver José Guadalupe Posada. His images, accompanied by witty social commentary in rhyming verse, were printed in newspapers and reached the farthest corners of the Mexican Republic.  The images are not invoking death but are mocking the living – their defects, weaknesses, and vices.  The Catrina, an upper-class woman of the turn-of-the-century, is depicted in her broad-brimmed hat and is Posada’s comment on the “wannabes” in Mexico at the time who aspired to be everything French. The idea is that the rich may put on airs and wear their fancy clothes, but underneath they are just like you and me. In other words, death is the great equalizer as we are all mortal.

We met his wife and two other artists who were busy making the Catrinas.  The detail and quality in each of the pieces were awe-inspiring.  I truly wanted one of the Catrina’s on horseback, but they had been sold. Our driver, Homar tried his best to convince them to sell one of them but to no avail. 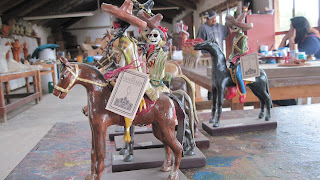 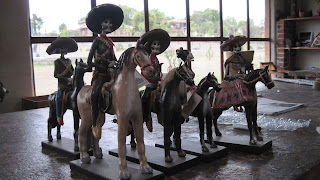 The church has been turned into an art gallery where you can view his paintings.

We returned to the workshop/gallery where we were pleasantly surprised by Juan’s arrival.  He kindly asked us to view his art studio.  What an amazing space for him to create his masterpieces.  After viewing all his work, he then invited us to his home.  Each room had a differently decorated fireplace, and one room housed a grand piano and nothing else.  We wished we could have taken pictures, but it would have been extremely rude to do so.  We felt very fortunate to have been invited into his studio and home and realized that if we had been with a tour (40 people) that this would never have happened. 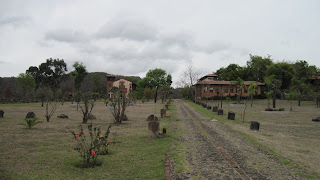 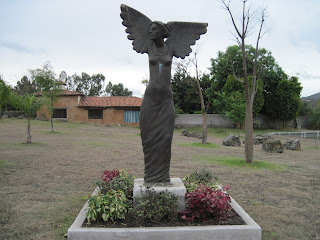 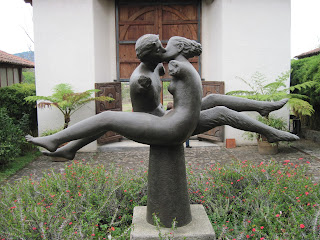 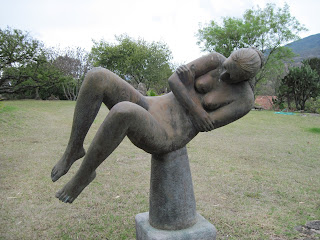 Our next stop was the town of Capula where we had a nice lunch at the only place in town to eat, a taco stand.  It was good food.  We shopped for a bit and found a Catrina that I liked but it was not the same quality as the artist’s.