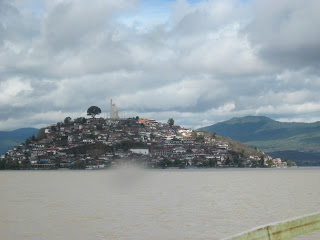 The State of Michoacán is known for its beautiful scenery historic buildings, traditions and culture.  The area we are visiting is known as the La Ruta de Don Vasco (the Don Vasco route).  Don Vasco de Quiroga was educated as a lawyer and was sent by Spain to govern the colony. He was so well loved that the Catholic church appointed him as a bishop even though he was not a priest. He founded hospitals in Tzintzuntzan, Patzcuaro, Ururapan and Cuitzeo Acambaro.  He taught the Purepecha  about religion, crafts and the fundamentals of self-government. He was greatly loved by his people and became known to them as ‘Tata Vasco’ (father Vasco). The skills he implanted among Purepecha have been passed down to their descendants, who are today considered among the most skilled crafts persons in Mexico.  We wanted to see all the crafts that are famous in this area.  Each town has its own unique craft. 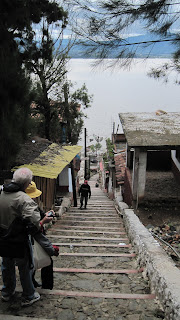 Because Patzcuaro is 2100 meters above sea level, it will take us a few days to adjust to the change. We are finding that it takes more effort to climb hills and stairs.Day two of our trip started with breakfast at the hotel trying to salvage what we could because of our ‘no show’ guide.  Fortunately, we met Chris, who was on a buying trip for his two stores in the States. He told us of places we should see and suggested we use his taxi driver, Homar, who spoke very good English.  Homar was busy with Chris that day but we arranged to hire him for the next two days to visit some of the small towns around Lago de Patzcuaro.  He charged 140 pesos per hour (12.00 cdn) and so we split the cost with the other couple.
Because we had another ‘free’ day, we decided to go to Isla de Janitzio. We took a taxi to the dock where we boarded one of the pangas for 45 pesos (4.00 cdn) for a return trip. There are five islands on the lake but Isla de Janitzio is the most important.

There are several meanings to Isla de Janitzio: ‘the place where it rains’; ‘hair of corn’ and ‘fishing location’.  The indigenous community of the village has retained much of the authenticity of their customs like the Purepecha language, clothing and the vigil of the dead, a ceremony that attracts visitors from around the world on November 1st and 2nd.  At night, it is customary to bring offerings to the dead.  There is a procession with candles and animated with religious chants. The whole island is resplendent with lights and torches. 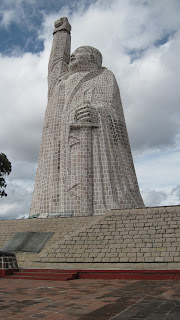 At the top of the hill is a 40-meter monument with right arm raised and hand clenched.  This monument is in memory of Don Jose Maria Morelos y Pavon, a national hero of the revolution for independence. Inside the monument are murals, depicting the hero’s biography and painted by Ramon Alva de la Canal.

There is a walkway going around the inside to the top of the monument and if you are brave, you can walk to the top of the clenched hand.  Once inside the hand, you have a panoramic view of the area. We all walked up but once at the top, it was a tiny room and I got a little claustrophobic and had to return to the ground but it was worth the few moments spent up there.

On our way down the hill, we decided to stop for a bebida (drink). I had a drink called Jarros Locos made with orange, lime, Fresca, salt and a type of chili powder that was not hot.  The drink was different and delicious. 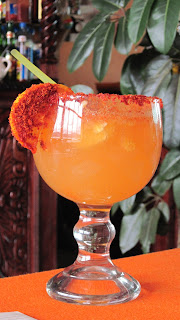 After resting, we decided to walk around the perimeter of the island.  The women went along the shoreline and the men took ‘the high road’.  We saw the way they lived instead of just the tourist area. Very enlightening. 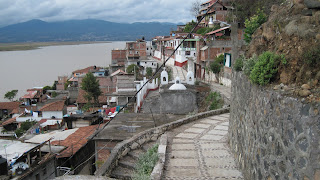 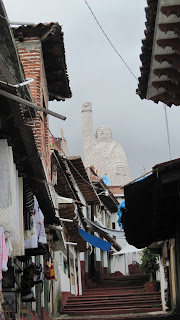 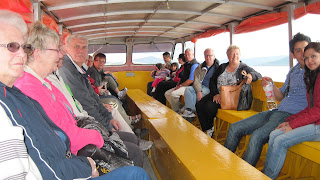 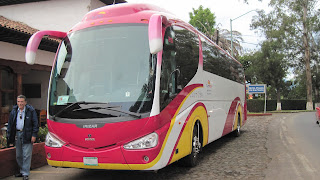 Once on land, we were trying to decide if we should take the bus or a taxi back to town when the tour guide asked us to join the group on the bus and they would take us at least part way to town. On the bus, we were pleasantly surprised when the group decided to sing for us.  The song they chose – in Danish – was Auld Lang Syne.  Then they sang another song for us – no idea what it was but what a nice thing for them to do.  We told them we would visit them all in Denmark! 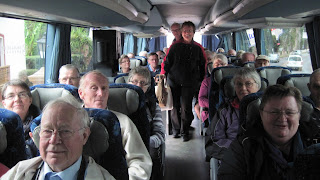 After a lovely dinner at the hotel, we were delighted to find out that the hotel had arranged entertainment.   A group of four performed the El Baile de Los Veijitos or dance of the old men. The men wore muslin white pants and shirts embroidered at the legs and arms with a sash. They also wore a mask looking like an old European (pink face and white hair). This was a chance to mock the Spanish ruling class by doing a dance hunched over like old men with a cane.  It was a hoot. 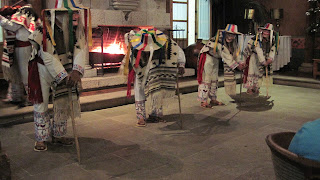 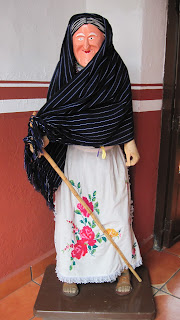