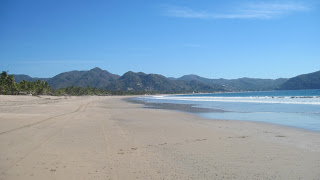 La Manzanilla
We started our trip to the La Manzanilla “Art Walk” in a very over crowded bus that chugged along the curvy highway.  I was glad that the trip was only 20 km. I am sure that the 15 people standing were happier.
There were 7 different venues with as many genres of art from jewellery to collages and everything in between.  Everyone has their own idea of what constitutes good art but I found several pieces that I would have bought given more space in my home.
We had lunch at Valentina’s which is on the beach.  The food and service were very good.
People come from Barra and Melaque to walk the beach from La Manzanilla to Boca de Iquana.  The walk is approximately 4.6 miles.  The beach is flat and the surface hard enough to walk, ride a bicycle or take a vehicle. So of course we decided to see how close we could get to Boca.  At this point, you should know that I was not prepared to do any walking.  I did not have suntan lotion on, no water, no hat and a spaghetti string dress on.  But hey, why should those little details stop me?  We figure we made it about 3 miles when I decided that we had gone far enough.  We still had to walk back!  By the time we made it back, I was dehydrated, sunburned and tired.  My husband wanted to go on the swaying bridge over the crocodiles but I needed water and shade quickly.  The crocodiles could wait. 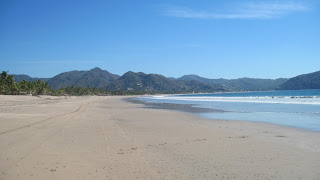 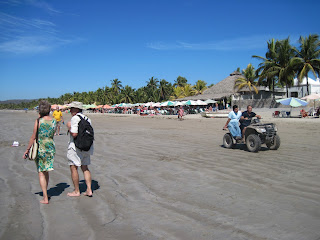 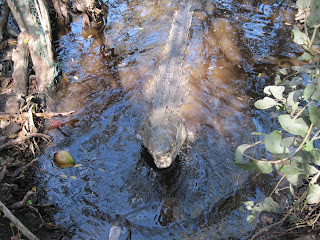 The crocodiles?  Running through La Manzanilla is a lagoon which harbours crocodiles and other species of wildlife.  The town has erected a fence around 3 sides of the lagoon.  When we were there last year, some of the fence had been pushed down by something rather large. We assumed it was a crocodile.  They hadn’t at that time put a fence along the beach side of the lagoon so the crocodiles were allowed to sunbath alongside of anyone on the beach!  This year they did put a fence along there but the crocodiles have pushed their way under the fence.  Now they can continue to enjoy the beach too.  We have seen crocodiles as long as 12+ feet.  You can pay to feed them with fish which is interesting to watch. The lucky crocodile that was being fed that day was approximately 16 feet long.  The head on them is huge.