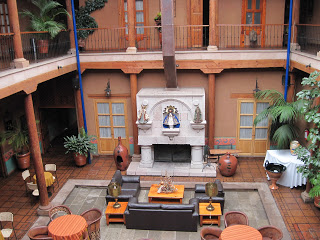 We decided for this side trip that we and another couple were going to forgo the packaged tours and go on our own.  What we discovered may well change the way we see Mexico in the future. Our journey began with travel arrangements on Mexico’s bus system. 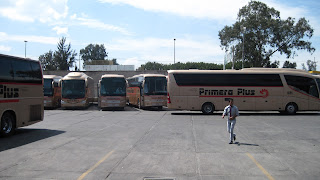 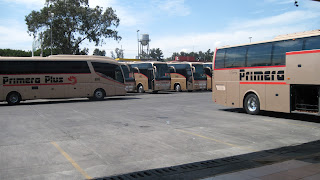 The bus system in Mexico is like a well-oiled machine.  At one time, approximately 80% of the Mexican population used the bus as their main source of transportation. The quality of the buses varies from the “chicken” bus that serves the local towns to the premier buses that travel longer distances.
On our trip to Patzcuaro, we paid 65 pesos each, selected our seats and boarded Primera Plus to Manzanillo.  This bus is a definite step up from Greyhound.  Before you board, they offer you a snack if it is a short distance plus a beverage or for longer distances, they offer you a sandwich, fruit and beverage.  While selecting our seats we mentioned that our friends Barra de Navidad would be joining us on this trip. Fortunately, we did because the bus was unusually late and they were just going to bypass Barra to make up time.  Unknown to us, the travel agent at Melaque phoned the office in Barra and our friends were asked if they were friends of ours.  Once confirmed, the bus did go to Barra to pick them up.
We arrived in Manzanillo and an hour later at 10:00 pm we boarded the ETN bus. We paid 650 pesos (60.00 cdn) each.  Now, if the Primera Plus is a step up from Greyhound, then the ETN is a step above Primera Plus.  We were given the usual sandwich, snack and beverage before boarding.  The seating on this bus is two seats on one side and one on the other side.  The seats are spacious and have a leg rest that feels like you are sitting in a recliner. There is lots of room in front of you so that when the person in front reclines all the way you still have plenty of room. The bus also has two washrooms.  There is coffee and tea at the back, which you can have at any time. Movies are also shown for the first hour or two only as this is an overnight bus.  There is also free Wi Fi
We arrived in Morelia at 5:30 a.m., caught a local bus to Patzcuaro for 32 pesos (3.00 cdn).  From the bus depot, we got a taxi to Patzcuaro Centro.
We searched for a good hotel and found Hotel
Casa de Refugio.  The going rate was 1,000 pesos (80.00 cdn) per night but we got our rooms for 400 pesos (35.00 cdn), quite a savings.  When we came back to the hotel with our luggage, we were informed that one of the rooms would not be available for a couple of days on the weekend.  They showed us other rooms and we were instantly upgraded to a suite for the same price.
We had previously arranged for a guide to show us around Lake Patzcuaro which has numerous towns, each specializing in a different craft.  We were to meet him that day to go over our arrangements but he never showed.  We spent the rest of the day walking around Patzcuaro.
One of the places that we found interesting was the library.  The library was formally a church and you can still see some of the original designs on the walls.  At the back of the library is this lovely mural depicting the history of Mexico.  The mural was completed in February 1942. 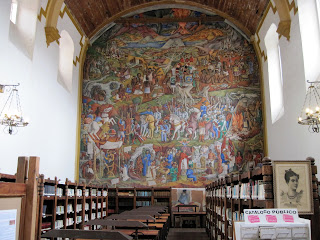