We were heading home from a tour of the Cuzalapa coffee co-op, Color de la Tierra about a two hour drive in a grey van with 12 other people when I heard a strange grinding noise.

“What is that noise?” I asked my husband.

Seconds later, the driver pulls over onto the shoulder. We discover it is a flat tire. Now I am thinking, no problem. There are half a dozen men who surely must be able to fix a flat. We all exit the van. Women gather in one area expecting that this will only take a few minutes. The men get the spare tire out but discover there are no jack and no wrench. Apparently, the driver’s son had borrowed the tools and did not return them. I can well imagine the conversation he was going to have with his son later. 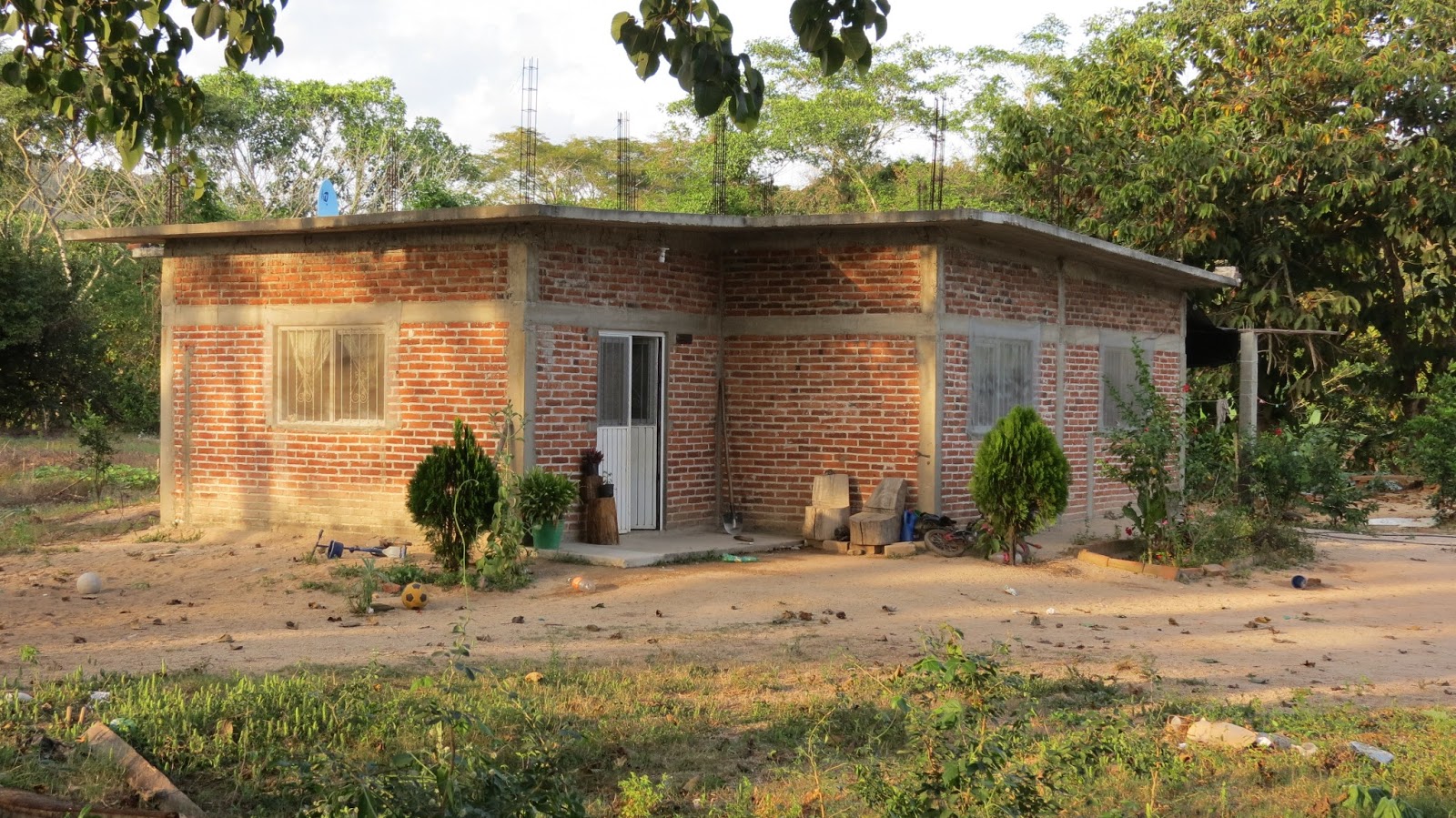 We are almost in the middle of nowhere. I can see three homes; two are down the road and the closet one is next to us in down in a bit of a dip. There is a woman there with two little boys watching the antics of this van full of gringos. Noticing we did not have any tools, she promptly went to her truck, got a jack and a wrench, and brought them over to the men. 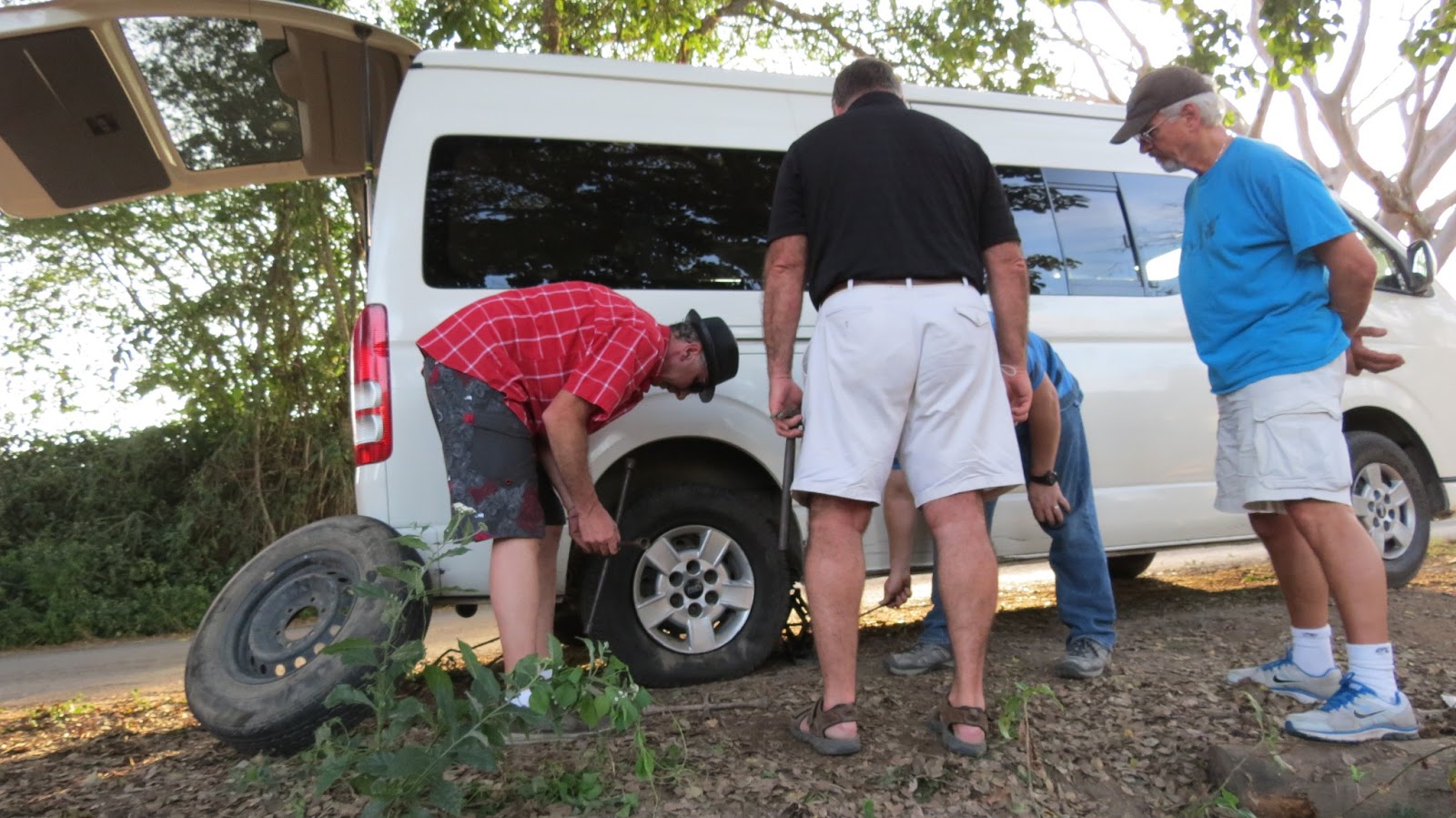 I don’t know a lot, well nothing about changing tires but I could see something wasn’t working. So the woman put her two sons into truck and headed down the road somewhere and returned with more tools. So I figure surely, now they can fix it. Well it was quite the show. The wheel nuts were so tight that one man would put the wrench on the nuts and another man would stand on the wrench and try to jump on it. Those nuts were not moving. I learned later that there were only four wheel nuts when there should have been six. So perhaps it was a good thing that they were on tight.

Although few and far between, a few vehicles passed us including a police car but no one stopped to ask if we needed help. With the gaggle of men surrounding the tire, it would appear to anyone passing that we had more than enough help.

I noticed at one of the homes down the road there was a pickup with about 4 or more people around it, watching the apparently very interesting show happening at our van. I would not have been surprised if they pulled up chairs and grabbed some cervezas.

After struggling with the wheelnuts for close to three quarters of an hour, the men were no closer to getting them loosened. 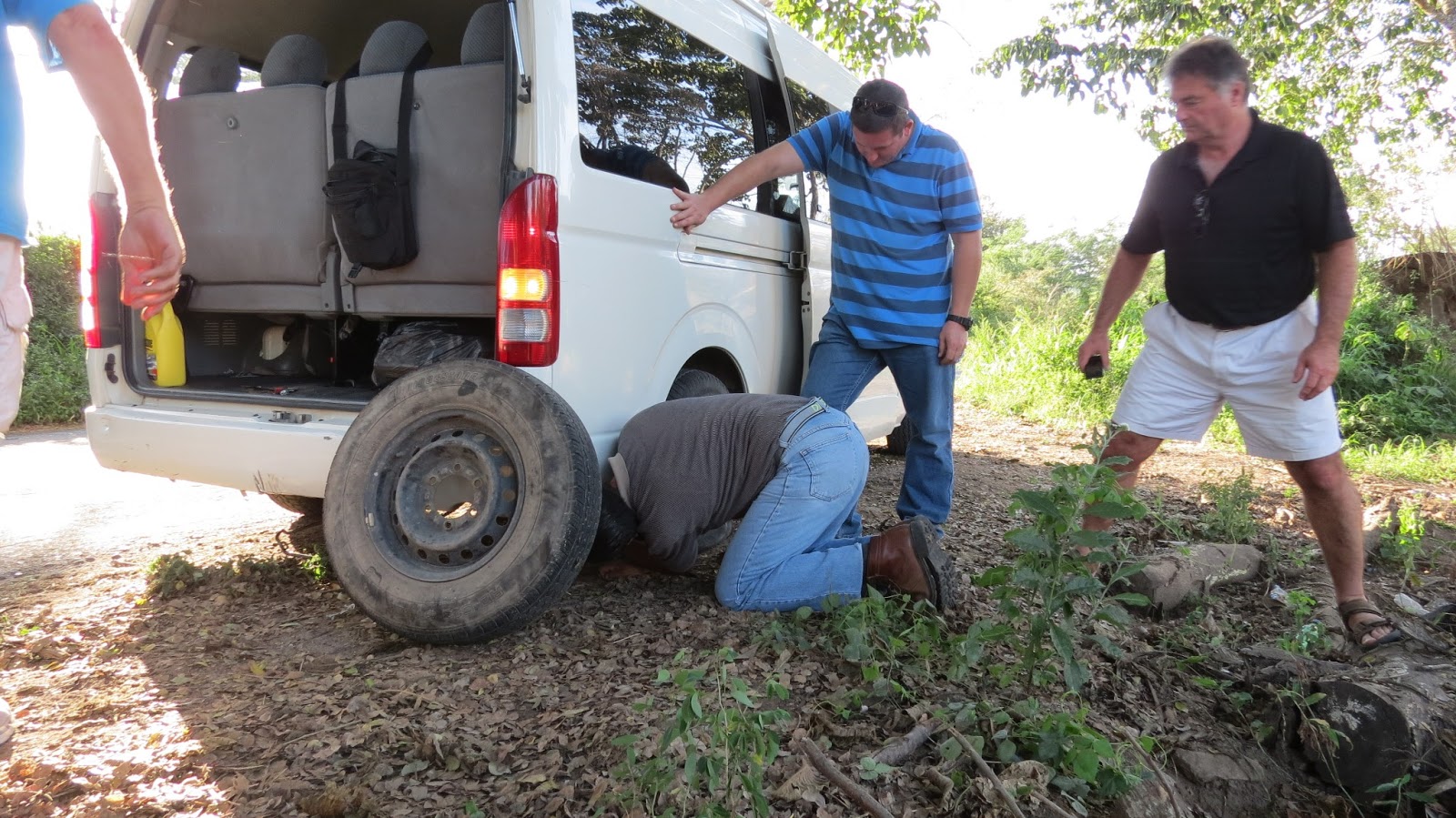 The women were beginning to realise that this was not going to be a 10-minute job. One woman worried that nightfall was near. She said, “What would happen then? Do you think there would be banditos in the area?” We assured her that it was very doubtful and not to worry. Others were just hot and tired. There was no place to sit. We had very little water and no food. We were hot, thirsty, and tired.

Then down the road, we see two men carrying what turned out to be a long pipe and a wrench that they attached to the pipe for more torque (that bit of info from my husband). They were successful and received a round of applause from their captive audience. With chests puffed out like roosters, they said “gracias” and returned to their homes.

The spare tire was put on and we eagerly climbed back into van. Dan, our tour guide, tried to give some money to the woman but she would not accept it. She grudgingly accepted a package of coffee.

Our driver turned the key but nothing happened. The battery was dead, apparently from having the four way blinkers on. Okay, so now we were getting a little worried. Did I mention that there was no cell service in that area?

The men hopped out of the van again and started to push the van backwards as we were uphill. I closed my eyes at this point, as I was afraid we would roll off the road in the dip. That dip seemed like 200 feet down in my imagination.

Success! They were able to jumpstart it and we were finally on our way home.

“Dan, are you going to charge us for this extra little adventure?” I asked.
Dan laughed and replied, “No, just consider it a little extra bonus on this trip.”

Music is everywhere in Mexico

Chiapas Day One
Scroll to top